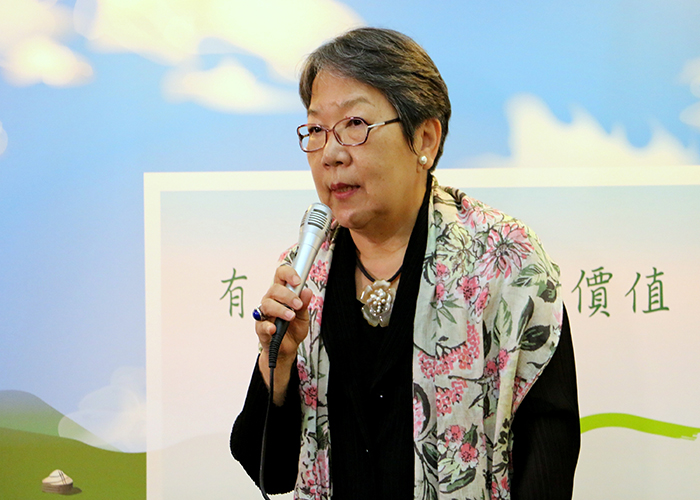 ‧ Chinese Name: 席慕蓉
‧ Date of Birth: October 15, 1943
‧ Place of Birth: Sichuan, China
‧ Did You Know?
Xi Murong, a famous modern Chinese essayist, poet, and painter, has won numerous awards. Her literary works, mostly in new poetry and prose, have been widely acclaimed and created what was called the "Xi Murong whirlwind" effect as they swept through Taiwan's literary scene. Her early poems were known for their freshness and beauty, earning a name as "soft poems." They were notable for their light elegance and vivid emotional warmth, gaining particular popularity among young men and women in what became known as the "Xi Murong Phenomenon." The year 1989 was a watershed in her creative career. After she first set foot on the Mongolian plateau, she turned from simply listening to her parents’ longing for their homeland to expressing her own love for Mongolia in her poems.

Xi Murong was born in 1943 to parents from Inner Mongolia, originally from the Minggan Banner of the Qahar League, and her Mongolian name, from which her Chinese name is transliterated, translates to "large river." Her father’s career with the military meant she moved frequently as a child, eventually moving to Hong Kong in 1949 and then on to Taiwan in 1954.

She began writing poetry began during those nomadic years. She had been keeping a diary to keep track of things, and she came across the anthology entitled "Nineteen Old Poems," her first book of poetry. In it, she found many lines of poetry that gave expression to her feelings of nostalgia, and ever since, she has been writing poetry to bring balance to her inner world.

In 1956, Xi, who had been interested in drawing since she was a child, entered the Art Department of Taipei Teachers' College to formally study painting. Three years later, in 1959, she joined the Fine Arts Department of National Taiwan Normal University.

In 1963, she participated in a writing competition under the nom de plume Xiao Rui, winning an award for her piece "Souvenir" and gaining some confidence in her skills as a writer.

The following year, she went to Belgium to study at the Academie Royale des Beaux-Arts, specializing in oil painting, winning a number of awards for her work.

In 1965, her works were selected for the 70th Salon des Indépendants in Paris, and she also participated in the 81st Salon des Femmes Painteres and the 10th International Women’s Painting Exhibition. In the same year, she was invited to take part in the Exhibition of Contemporary Chinese Painters held by the Royal Museum of History and Art in Beijing. The following year, Xi held her first solo exhibition in that same city.

In 1976, under the pen name Qianhua, she entered the first United Daily News Fiction Awards and won with her piece "Birthday Cake," which was also her first piece of short fiction to be published. However, she wrote lesser novels later in her life, preferring to focus on new poetry and prose.
In 1970, she returned to Taiwan and began teaching at the Fine Arts Department of Hsinchu Teachers College. During this time, in addition to continuing her creative work, she also held many exhibitions, and in 1979, she held the first exhibition of laser painting in Taiwan.

In 1981, Xi Murong published her first book of poems, "Seven Miles of Fragrance," which caused a sensation and was rapidly reprinted seven times. She spared no effort in singing the praises of youth, love, and all things beautiful. At the same time, a sense of nostalgia for the wind and sands of a land far away remained etched in her mind. To her, the ideas of a "homeland" and "the steppe" always held a feeling of expectation and awaitedness. As the years passed, that emotional yearning for her Mongolian bloodline became thicker and thicker in her lifeblood.

In 1989, Xi Murong finally set foot on the Mongolian steppe, beginning her journey to explore her roots. It was at this time that she composed "The Steppe of My Father, The River of my Mother," which was adapted into a song by Mongolian singer Dedema and remains sung to this day. The following year, she published a collection of prose entitled "My Homeland on the Steppe" and a selection of modern Mongolian poems entitled "Far Distant Starlight."

In 2010, she began publishing narrative poems about Mongolian heroes. All of this goes back to when a geography teacher in middle school used discriminatory language to depict Mongolia, even though he had never been to the Mongolian steppe and had never studied nomadic culture. This made Xi realize that education is like water that can lift a boat or sink it, and so she decided to do what she could to use her writing to uplift society.

Her published works include more than fifty poetry collections, essays, paintings, art treatises, essay collections, and anthologies. From her first collection of essays, "Traces of Growth," to "Writing to Happiness" and "The Writer of Life" present her experiences of personal growth and writing about her family, while "My Home on the Steppe," "Mongolian Gazelle, Rose, Flying Fish," "Song of Wild Goose," and "The Golden Saddle" carry a Mongolian sentiment. The prose of Xi Murong is a showcase for the vicissitudes of life, a record of the little things that make up our lives.

Xi Murong’s works have been honored with a number of awards. In 1966, she won the Belgian Royal Gold Medal and the Brussels City Council Gold Medal. In 1967, she took part in the European Art Exhibition in Beijing and won two bronze medals from the European Art Association. In 1981, her piece "Exodus" won the Golden Tripod Award for the Best Lyrics in the records category, and in 1987, "Nine Songs of Time" won the New Poetry Award in the Zhongxing Literary Arts Awards. In 2013, she won the Chinese Cultural Figure Award in China for her book "21 Letters to Hai Rihan." In 2014, she won the Taiwan Poem of the Year Award, and in 2017, she took the Best Original Single Award in the Ethnic Minorities Category of the 10th China Golden Record Awards for the lyrics of "Homeland Song."

Xi’s works have been warmly and widely received by the public for many years now, and as a result, many scholars have expressed the opinion that her poems should be considered "popular literature" and not rigorous literary works. In fact, the concept of 'artistic' versus 'popular' literature has been a significant topic of exploration in the literary world for many years. Xi Murong is an anomaly in Taiwan's poetry scene because she does not belong to any poetry society, and such comments do not matter to her as she writes poetry simply because she enjoys it. She has even remarked that she has "just written a few simple poems that happen to speak to simple phenomena in life." Perhaps it is the simplicity at the heart of her works and that is why they have been able to touch audiences’ hearts and eschew obscurantism.