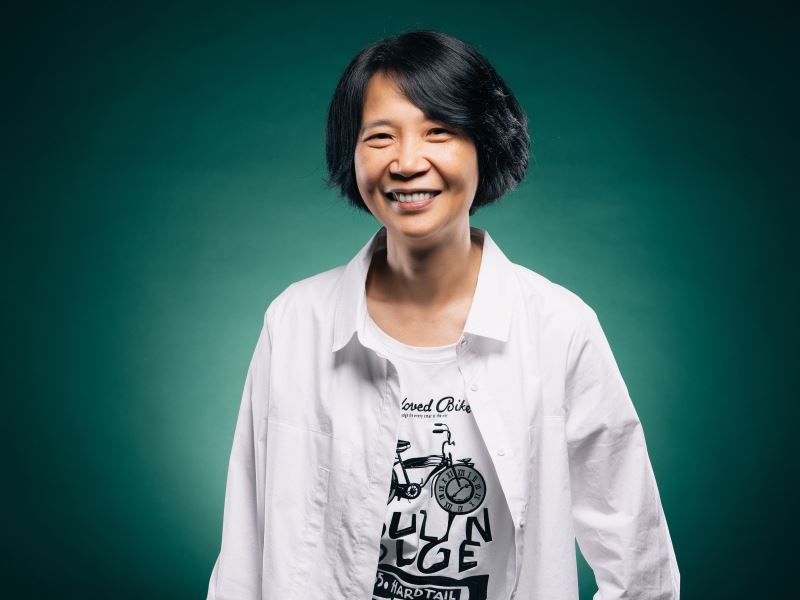 ‧ Chinese Name: 陳柔縉
‧ Date of Birth: 1964
‧ Place of Birth: Taiwan
‧ Did You Know?
Chen Rou-jin once noted that she likes to explore history from the perspective of people's daily lives, and when she looked through past news reports, she was always curious about the lives of ordinary people at the forefront of the times.

Historical writer Chen Rou-jin was born in Yunlin in 1964. After graduating from the Division of Judicial Administration of the College of Law at National Taiwan University, she served as a reporter in the politics team at the "United Daily News," "The Journalist" and also worked as a columnist. Later she came to the realization that the context and story are what draw people’s interest in history, and began to specialize in historical writing. The reason she embarked on her career in journalism was due to the fact that women were unable to pursue diplomacy, thus she chose journalism instead. After sending her resume to "United Daily News," she worked her way into a writing career. However, after spending several years on the frontline of a highly competitive media industry, she decided that she was not suitable for the job. She later took advantage of the opportunity to join "The Journalist" and switched from real-time interviews to report writing, which was when she came into contact with the history of Japanese rule.

Chen’s first work was "Private Politics: Political Secrets of 25 Political Players (私房政治──25位政治名人的政壇秘聞)" published in 1993. In 1999, Chen compiled her past reports in a book titled "Relatives of the Presidents: Taiwan's Powerful Families,” which serves as the turning point in her writing career and opened her to the history of Taiwan during Japanese rule. On one hand, Chen was motivated by her intellectual curiosity and desire to demystify that era in Taiwanese history. On the other hand, Chen Rou-jin believes that the knowledge gap of Taiwan’s past will hinder people’s understanding of modernity. Chen Rou-jin’s first novel was completed smoothly, perhaps as a result of the information that she had collected in the past, allowing her more room to switch to novels. She once said that she did not write a novel early on because she felt that she has not fully grasped the historical eras. However, once she began to grasp them, she was able to immerse herself in the era of Japanese rule. In 2006, her work "Miyamaecho 90 Banchi," based on 12 years of interviews, brought attention to the life of Taiwan’s important diplomat Zhang Chao-ying (張超英), which was selected as one of the top ten winners of the China Times Open Book Award.

In 2005, Chen's published work "The Taiwan Western civilization first experience" was selected as one of United Daily News’ top ten non-literary books in addition to winning the Golden Tripod Awards. "Everyone is an Era" published in 2009 won the Golden Tripod Award in the non-literary category. In 2018, "A Carpenter and His Taiwan Exhibition" received the Open Book Award in the Chinese literature category.

In 2020, she published the first historical novel "The Daughter of Kaohsiung (大港的女兒)," which uses Kaohsiung Port in the Japanese era as a stage to convey the history of modern Taiwan over a century, and details how a daughter of Kaohsiung was able to break through the obstacles under foreign rule in order to live out her life. Prior to her passing, Chen believed that history should be the core of education, and people should be able to question whether history can serve as a form of life education in understanding life and death.

Chen Rou-jin passed away on October 18, 2021, at the age of 57. Chen once said that she had been interviewing historical figures, tracing Taiwan's past, and researching historical materials for 30 years. Her most valuable accomplishment was turning the results of these interviews and textual research into intelligible works, showing that these historical events not only exist in textbooks and documents but have also been close to people's daily lives. They enable readers to have a deeper understanding of Taiwan's cultural history in addition to contributing to the promotion and popularization of Taiwan’s history and culture.