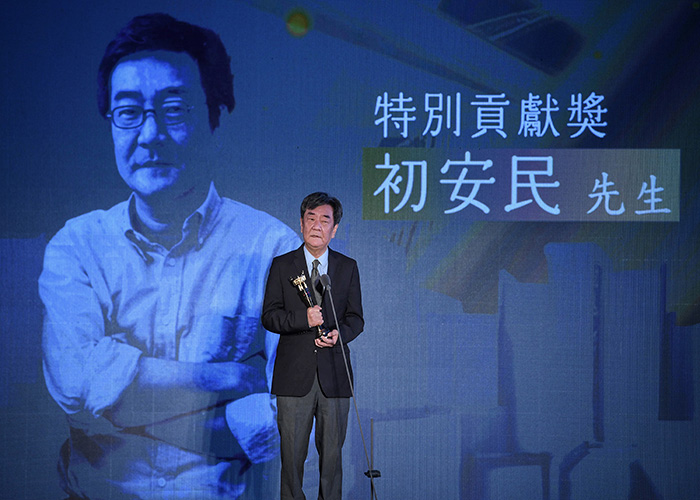 ．Chinese Name: 初安民
．Year of Birth: 1957
．Place of Birth: South Korea
．Did You Know?
Chu An-min was honored with the Special Contribution Award of the 45th Golden Tripod Award for his contributions to the Taiwanese literature publishing industry. He was named one of the most influential people in publishing by Kingstone Books, and has received an Outstanding Alumnus Award from National Cheng Kung University. He has also authored poetry collections, including "A Heart Intoxicated with Sorrow (愁心先醉)," "The Road Southbound (往南方的路)," and "The Most Remote Island in the World (世界上距離陸地最遙遠的小島)."

Born in South Korea in 1957, Chu An-min emigrated to Taiwan in 1977, enrolling in the Chinese Literature program at National Cheng Kung University. In 1979, he won the school's literature award, as well as published several books of poetry. After graduating with a BA in Chinese Literature, he took up work as a high school teacher. In early 1998, Chu joined the Unitas Publishing Company, and since 2002, he has been the chief editor of their publishing operation.

For nearly 20 years, Chu An-Min has been the editor-in-chief of Ink Literary Monthly Publishing Company, publishing the works of well-known, established writers and nurturing talented new writers alike. He has also been behind the production of "An Anthology of Chinese Literature from Taiwan's Indigenous Peoples," an important contribution to Taiwanese Indigenous literature, and released the complete works of literary stars of the previous generation, providing precious materials for the study of literary history. He published his poetry collection "A Heart Intoxicated with Sorrow" in 1985 and "The Road Southbound" in 2001. He offered an in-depth description of a strong identity and love to his homeland in his poetry collection "A Heart Intoxicated with Sorrow." Also, he used a biographical method to describe the experiences and dilemmas he encountered in the changing process of society and politics in Taiwan. In his poetry collection "The Road Southbound," he provided deep reflective thinking and criticism for the society and politics in Taiwan.

In addition to publishing, Chu also edits Ink Literary Monthly, sowing the seeds of literature and winning recognition in the magazine category of the Golden Tripod Awards. The inaugural issue of Ink sold an astonishing 30,000 copies. In the early 2000s, it was one of the few comprehensive magazines that featured writers on its cover as a marketing tool, combining this with coverage of a variety of lifestyle topics including film, performing arts, and cuisine, expanding its readership beyond simply those interested in literature. In recent years, the themes of the magazine have become even more diverse—for example, the cover of the last issue featured French novelist Albert Camus, while the latest cover was dedicated to the popular Japanese anime series "Demon Slayer: Kimetsu no Yaiba."

In addition to his editorial work, Chu An-Min also organizes the National Taiwan Literature Camp to inspire young literary enthusiasts, has established the Youth Supernova Literary Award to inspire young writers, and in recent years, founded the Romain Rolland Prize to revitalize Taiwanese art and further expand the literary sphere. For these efforts, he was honored with the Special Contribution Award at the 45th Golden Tripod Award in 2021.

In his work heading up Ink Literary Monthly Publishing Company, Chu constantly strives to provide a "garden of literature" in which literary flowers of all colors and kinds can freely bloom. Things like personal background, likes and dislikes, and even literary genre should all be set aside, he says, as "literature should be like a republic without borders or boundaries between nations."

Being able to publish in Taiwan, where cultural differences are tolerated and free voices are allowed, has been a powerful source of support as he strives to implement this philosophy. "The most valuable thing about Taiwan is how, for almost half a century, it has held a position in the Chinese world and tradition as an open, free, and diverse place - not only in terms of the publishing industry, but also language education, academic training, and academic criticism."

For Chu An-min, editing has become a vocation to which he is happy to dedicate his life. When asked why he chose to be a literary editor, Chu draws on the famous remark by Japanese writer Saburo Kawamoto that it is only through literature that we are able to hear the murmurs of disadvantaged people. "Literature is my faith," says Chu An-min. "It is the only thing that remains, recording the stories of generations. It is more real than history. To be able to contribute to this line of work and be part of the long road toward justice and right is both a pleasure and something that requires ongoing commitment."