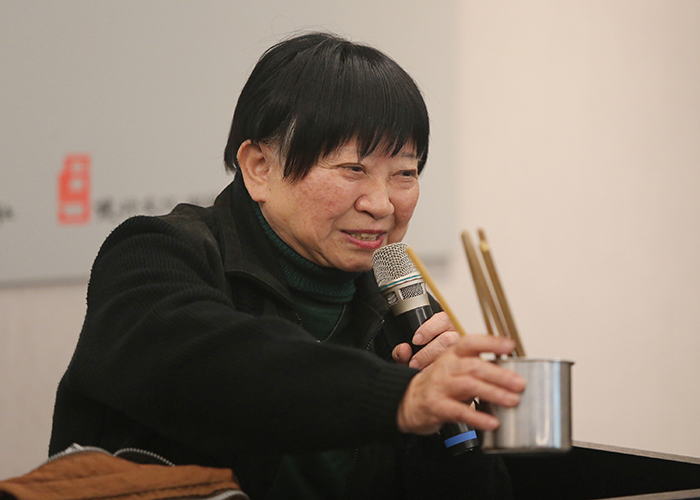 ．Chinese Name: 張曉風
．Year of Birth: 1941
．Place of Birth: China
．Did You Know?
Chang Show-foong has been honored with a number of literary awards, including the Zhongshan Literary Award, the National Award for Arts, the Wu San Lien Literary Award, the China Times Literature Award, and the United Daily News Prize. She was also previously named one of the Ten Outstanding Young Women, and in 2012, she was elected to the Legislative Yuan.

Born in 1941 in Zhejiang Province, China, Chang came to Taiwan with her parents at the age of eight. She graduated with a degree in Chinese literature from Soochow University in 1962. After this, she went on to teach at her alma mater, as well as at Hong Kong Baptist Theological Seminary and National Yang Ming University. Chang Show-foong became famous for her prose at the age of 25 and her collection of essays, "That Side Of The Rug (地毯的那一端)," for which she won the Prose Award in the Zhongshan Literary Awards, is her most iconic work.

During her childhood, she was never fussy about what books she wanted to read, instead, her choices were random rather than deliberate. When she was in high school, she would often wait in line to check out books, taking whatever remained of the selection. By the time she was in elementary school. She was exhibiting considerable talent as a writer, and constantly submitted articles for publication. As she grew older, even when she was busy with her many roles as a wife, mother and teacher, she never allows herself an idle moment but is constantly nurturing her literary soul.

The main part of Chang’s creative output has been prose and plays. Her prose style is varied and rich, ranging from the girlish epistolary style of "That Side Of The Rug," the homesickness of "The Nostalgia Stone (愁鄉石)," the Christian piety of "For You (給妳)," and the prose reporting on the refugee villages in Northern Thailand in “Heartfelt Ties (心繫)," to the lyrical travels in "The Stars Are Out," as well as writings from recent years focusing more on ecological conservation and Chinese language education. Her works have evolved from romantic love, friendship to a more compassing love of humanity.

Chang's writing is fluid and fresh, demonstrating both flexibility and precision in her application of language, and she excels at using poetic descriptions with a unique aesthetic taste. Her creative philosophy, based on a combination of Chinese culture and Christian faith, enables her works to travel between Eastern and Western concepts without being limited by creative form. She has written essays, plays, novels, poems, and many other different forms—even lyrics—and her profound knowledge of Chinese literature and her love and compassion for the world shines through in all of them.

Chang Show-foong's prose does not purely employ the language of everyday life. Rather, she believes that the language of prose depends on the simplicity, ebullience, and profundity of traditional literature. Since it is difficult for prose to attract readers through simple narrative excitement, it is especially necessary to employ charming literary language, a charm nurtured through the exquisite language of poetry and song. She has honed her unique prose style based on this philosophy, creating an approach that has been well-loved by readers for decades.

Her famous work, "On the Other Side of the Carpet," is an emotionally delicate and moving account of pre-wedding joy, but her accomplishments don’t stop there. Her subsequent works continued to develop and breakthrough in terms of content and technique, gradually shifting from depicting the trivialities of life to expressing her sentiments regarding her family and the world, incorporating different philosophical perspectives as they constantly developed. In addition to her prose works, Chang also writes mordant social criticism under the pen names Sang Ke and Ke Po.

Chang believes that "living with purpose" is where the nourishment that makes one a good writer lies, and this is the credo that has sustained her as an author over the years. Good works do not necessarily need to be based on rich life experience, she says; rather, "it is even more important to be a keen observer."