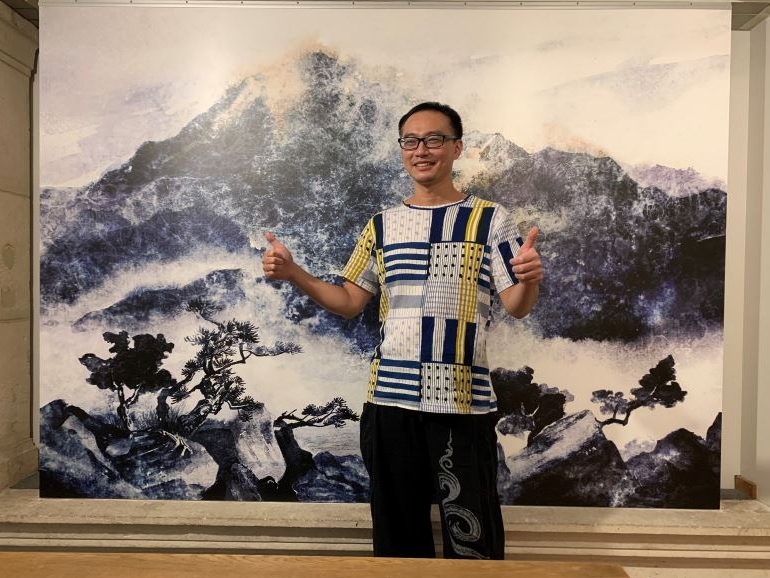 ．Chinese Name: 吳識鴻
．Date of Birth: May 04, 1983
．Place of Birth: Yunlin County, Taiwan
．Did You Know?
Wu Shih-hung is an illustrator, video director, and comic artist who has produced animated content covering Taiwanese culture, documentaries, and animated children’s series, winning numerous international awards. In 2021, he adapted Yang Mu’s autobiographical essay “Storms over Hills and Ocean (山風海雨)” into a comic of the same name, winning first prize in the Belgian Prix Raymond Leblanc, one of the most prestigious comics awards in Europe. With this, Wu also became the first non-European to take the honor.

Wu Shih-hung grew up with a love of graffiti and comics, particularly the Japanese titles Doraemon and Slam Dunk. In senior high, he enrolled in the art track, commencing education in painting. In 2004, he created an oil painting he titled “Ordinary People (普通人),” an experience that brought with it a first-hand appreciation for the stunning joy of creative work. In addition, he also took up ink wash painting and taught himself to make animations.

His early inspirations included the British painters Lucian Michael Freud and Francis Bacon, and French-Chinese artist Gao Xing-jian. In terms of his painting style, Wu considers the influence to have been largely in his approach to art as a medium for the expression of emotion. His works are inspired by daily life, movies, books, sleepless nights, and the tranquility of walks. His style is a blend of realism, darkness, and fantasy, with most of his works showcasing twisted, distorted forms. After completing graduate school, graduating from the Institute, he joined Tsai Chih-chung’s studio as an assistant, determined to devote himself to creative work. To pursue art full-time, he began working tirelessly at home creating oil paintings, organizing exhibitions, and submitting his works to galleries, but to no avail. After two years, he switched to more commercial art fields, including animation design and graphic design. His tools included ink, watercolor, acrylic paint, colored pencils, crayons, Photoshop, and After Effects.

In 2010, he participated in the documentary series “The Man Behind the Book” by Fisfisa Media, specifically the episode “In Search of the Man with the Sea at His Back,” as an animation producer, presenting fictional imagery in different media in animated shorts, interspersed with interview clips. This work received critical acclaim, launching his decade in animation. In 2015, he established Weeler Studio, a studio dedicated to promoting aesthetic education in Taiwan and producing short Taiwanese educational documentaries. Beyond this, his work has mostly been commercial documentaries, including 2015’s “Su Beng, the Revolutionist (革命進行式),” 2016’s “Black Bear Forest (黑熊森林),” 2017’s “Condemned Practice Mode (徐自強的練習題),” 2020’s “The Hidden Transcript of Academician Ts’ao (曹院士的隱藏文本),” and 2021’s “Yeh Shih-tao, A Taiwan Man (台灣男子葉石濤).” In addition, he has also been involved in children’s cartoons like the animated Hakka TV program “Persimmon-Colored Street Lights (柿子色的街燈)” in 2016, which was nominated for the 21st Golden Bell Award for animation and the 2018 animated show “Tell a Story (講麼个故事),” also for Hakka TV, which he co-directed and art directed and won the 53rd Golden Bell Award for animation.

In 2020, he again worked with Fisfisa Media, this time adapting Yang Mu’s autobiographical essay “Storms over Hills and Ocean” into a comic of the same name. On September 11, 2021, the comic won first prize in the Belgian Prix Raymond Leblanc, one of the most prestigious comics awards in Europe, making Wu the first non-European to take the honor. The story is based on Yang Mu’s childhood experiences and follows his journey through life, death, lust, and natural disasters to ultimately become a famous literary creator. Wu felt a kinship between himself and Yang as a creator, and incorporated his own perceptions in the process of adaptation. The characters and backgrounds in the art were created with a combination of freehand and computer-assisted drawing. First, they were sketched out on a computer and then printed out, haloed with ink and watercolor techniques to depict the mountains and seas of Hualien, emphasizing the atmosphere of the story through brush strokes. Wu remarked that creation is a process of self-adjustment, with each page presenting differently depending on the painting tools and his physical and mental state at the time of painting; it is this aspect that he finds the most interesting. In recent years, he has drawn on further artists he admires, including Italian comics artist Gipi, Japanese manga artist Taiyo Matsumoto, and Taiwanese illustrator Animo Chen, all of whom have unique approaches to storytelling.

After years of hustling to make ends meet, Wu finally returned to creation for his own sake in 2020, producing the animated short “Clothes on Rainy Day (雨天的衣服),” presenting the daily life of a family in a gloomy style. This work won Best Animation at the Montreal Independent Film Festival in 2021 and was an Official Selection at the 33 Girona Film Festival, Linoleum Contemporary Animation and Media Art, and the Fear No Film Festival. Wu Shih-hung has said that art is a kind of shackle for him, and artistic creation is actually not his top priority, but rather he simply wants a channel to vent his inner darkness so that he can live his life with more freedom.