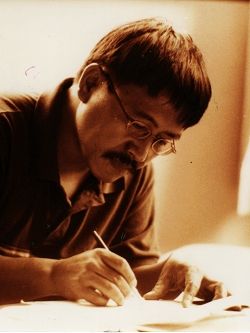 ‧Chinese Name: 拓拔斯‧塔瑪匹瑪 (田雅各)
‧Date of Birth: June 27, 1960
‧Place of Birth: Nantou County (Central Taiwan)
Did You Know?
Aiming to provide medical services to Taiwan's indigenous communities, Tuobasi Tamapima voluntarily gave up a high-paying position as a doctor to practice medicine in remote rural Taiwan. He has practiced in Taitung's Changbin Township and Orchid Island, at Hualien Hospital, and in the Namaxia and Taoyuan Townships of Kaohsiung County, and for his work, he has earned himself the sobriquet "Taiwan's Indigenous Schweitzer."

Born in Xinyi Township, Nantou County, Tuobasi Tamapima is a member of the Bunun people. His grandfather was a tribal leader and his father was a Christian pastor. While studying at Kaohsiung Medical College (KMC) on a public scholarship, he joined the Amoeba Poem Club, one of the school's literary clubs, and set off on his journey into the world of literature. His poems "Lullaby," from December 1981, and "Lonely Soul," from March 1982, were both selected for the 1985 edition of "Amoeba Poetry: 1964-1984."

In 1981, his short story "Tuobasi Tamapima" won second place in the Fiction category (first place was vacant) in the KMC Nan Xing Literary Awards. In December 1983, the full-length version was serialized in a supplement of the Taiwan Times edited by Wu Chin-fa (吳錦發), and was also selected for inclusion in the anthology "Short Stories of 1983" edited by Lee Chiao (李喬) and "Taiwan Fiction of 1983" edited by Peng Rui-jin (彭瑞金). In the editor’s commentary on the anthology, Lee notes that "a new star of fiction has risen, a friend who is eminently qualified to be called a 'indigenous writer' has taken the stage; he will inject new blood into Taiwanese literature and make the foundation of Taiwanese literature more solid."

After his work started getting such recognition, Tuobasi Tamapima decided to continue his creative pursuits, publishing literary works on Indigenous consciousness and identity. In the majority Han Chinese society of Taiwan, Tuobasi Tamapima's novels were among the first works of literature coming from an Indigenous Taiwanese perspective to receive widespread attention from readers, and the contrast between indigenous community life and urban culture was a unique and well-received theme that, along with his distinctive style, saw his works meet with excellent reviews.

In 1986, he won the Wu Chuo-liu Literary Prize (吳濁流文學獎) for his short story "The Last Hunter (最後的獵人)." "The Last Hunter" focuses on the question of how to deal with clashes of culture between different ethnic groups. The story is about a Bunun hunter who is forced to leave his community to work in manual labor in the city due to economic pressures, and then decides to return home to try to make a living farming and hunting after being treated unfairly by his employer. However, due to the nationalization of mountain and forest land, the traditional hunting grounds of the Bunun were gradually disappearing, meaning the hunter not only lost his original land, but also the hunting itself, which was misinterpreted as a "barbaric" and "brutal" act that must be punished by law. Through this work, the author reveals the plight of indigenous people in contemporary Taiwan through the daily trials and tribulations of Bunun hunters, and reflects on how indigenous communities have been deprived of their traditional hunting rights.

In 1988, Tuobasi Tamapima was awarded the Lai Ho Literary Award for his book of essays "A Medical Journey on Orchid Island (蘭嶼行醫記)." The book contains 73 essays in which Tuobasi Tamapima, in his special capacity as an officially dispatched doctor from outside of Orchid Island, writes about his experiences on the island, including the scarcity of medical resources, the locals being deceived by the government into letting their island be used as a nuclear waste storage site, and the simple and happy attitude of the local Tao people. The book also gives the reader a glimpse of how the modern Bunun doctor relates to the traditional ways of the Tao. In the process of writing, Tuobasi Tamapima discovered that literary creation could be a means of expressing the worlds of indigenous peoples, and that writing could be another way of serving the indigenous community outside of his medical practice.

Many literary critics have noted the gentle humanity of his works, which are written not in the style of social criticism, but more like a doctor's consultation, as though he is taking a pulse and writing a prescription. The howls of his writing do not give people a sense of division or confrontation, but rather they invite a sense of shame and self-reflection.

Outside of his writing and medical practice, Tuobasi Tamapima has remained engaged in indigenous issues in other ways. On December 29, 1984, when Taiwan was still under martial law, he co-founded the Taiwan Aboriginal Rights Association together with dangwai (黨外) activists from outside the ruling Kuomintang to fight for the rights of indigenous people and promote social movements that have gone on to have a profound impact on Taiwan, such as the Return My Land Movement (還我土地運動) and the Indigenous Name Rectification Movement (原住民族正名運動).