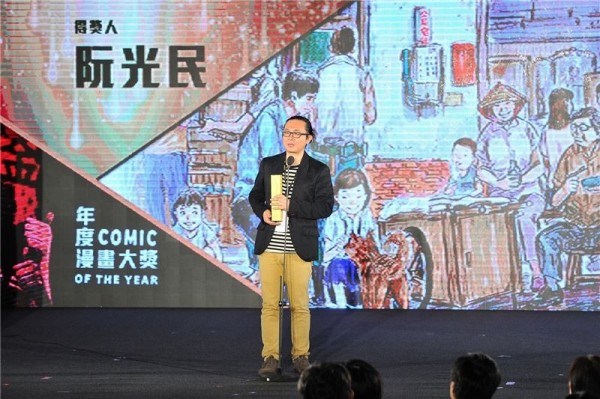 Ruan Guang-min is an award-winning manga artist whose works have received recognition for their detailed portrayal of stories and characters inspired by Taiwan. His 2009 work "Dong-Huachun Barbershop (東華春理髮廳)” is the first original Taiwanese comic to be adapted to TV drama.

Having developed an interest in drawing cartoons since an young age, Ruan started his career as an assistant to manga artist Max Lai (賴有賢), the author of "The Little Monk (小和尚),” after finishing serving in the army in 1997.

In 2003, Ruan began his journey towards becoming an independent cartoonist after choosing to stay in Taiwan instead of going to China with Lai. Ruan began working at an advertising agency during daytime while creating manga at night.

Making his debut with "Light and Darkness (光與闇)” in 2004, Ruan's earlier works like "It's My Way (田徑跑者的故事)” were mainly teen comics catering to the tastes of the Taiwanese manga market, which has been deeply influenced by Japan since the 1970s.

At the age of 30, Ruan became determined to create comics that focus on humanism, and established his own style with "Dong-Huachun Barbershop.” Taking inspiration from a barbershop Ruan used to pass by on the bus in Keelung, the story revolves around two step-siblings' encounters, conflicts, and reconciliation in the barbershop left by their common father.

In 2015, Ruan worked with noted writer Wu Ming-yi (吳明益) to interpret written text with illustrations, launching the first-ever comic version of "The Things That a Stone Lion Remembers (石獅子會記得哪些事？),” a short story taken from Wu's celebrated novella "The Magician on the Bridge (天橋上的魔術師).”

In the following year, Ruan released "Yong-Jiu Grocery Store (用九柑仔店),” which takes inspiration from his own childhood memories with his grandfather. Through illustrating the stories of common people in Taiwanese society, the manga not only presents the everyday life in Taiwan but also brings back collective memories shared by all those who lived on the island.

Ruan's ability to imbue his stories with a sense of warm, touching humor and reconnect readers with the land of Taiwan through comics has made him the winner of the 2017 Comic of the Year Award with "Yong-Jiu Grocery Store” at the 8th Golden Comic Awards.