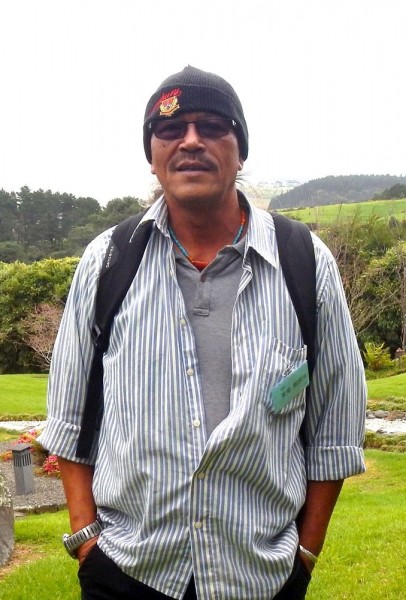 The ocean means a lot to Syaman Rapongan, a prolific author from the Tao (Yami) aboriginal tribe. Having been born and raised on Orchid Island, he wondered about the absence of ocean art and literature from the time he was an elementary student. This eventually led to his resolve to write about the ocean to fill this literary gap.

For Syaman Rapongan, the ages between 10 and 12 represented an idyllic period in his life. He was full of dreams, wanting to leave the insular island and seek a modern life. His childhood dream was to become a navigator and sail out to the South Pacific Ocean.

Upon coming of age, Syaman Rapongan left his world of flying fishes to study and work in Taipei. Using the Han Chinese name Shi Nu-lai (施努來), he became the first Tao student to be accepted by a public university without using his minority credits. He did odd jobs, including a gig as a taxi driver, to sustain himself.

Return to the island

The 1980s in Taiwan marked the start of public discussions on socioeconomic and political concerns, including aboriginal rights. The treatment and perception of aborigines versus those of the Han people came to be scrutinized from different perspectives.

Syaman Rapongan decided to return to Orchid Island in 1989 to rediscover his identity. He was then already in his 30s. Although not as spry as before, he sought to learn the traditional life of a young man from the Tao tribe. He embarked on a journey of learning to build a canoe and the construction of traditional lodgings.

His mother then challenged him to prove himself a man in the Tao sense by going diving and spear-fishing. Although deep diving caused his ears to ache badly at first, Syaman Rapongan did not give up. He kept trying, going deeper each time until he caught fish good enough to bring to his mother's table.

Through his physical training, Syaman Rapongan began to sense the direction of the ocean's flow and to heed nature's danger signals. Of his return to the ocean-centric life, he declared: 'The ocean is my house of worship, my classroom, and temple of creation.'

Writing on the island

Through short and concise language, Syaman Rapongan has been writing with deep emotions about his traditional Tao world. He has been able to describe and analyze it because he once left it for more than 10 years to lead a city life.

He expresses himself in a natural and simple style that is suggestive of his native Tao tongue, and his books draw on materials from legends narrated by tribal elders belonging to his parents' generation.

Syaman Rapongan has commented that he saw in the Han people a fear of the ocean, so he decided to convince them regarding the great beauty of the ocean through writing and words of encouragement: "Maka sagaz ka mo katowan (May you have the soul of a great fish).”