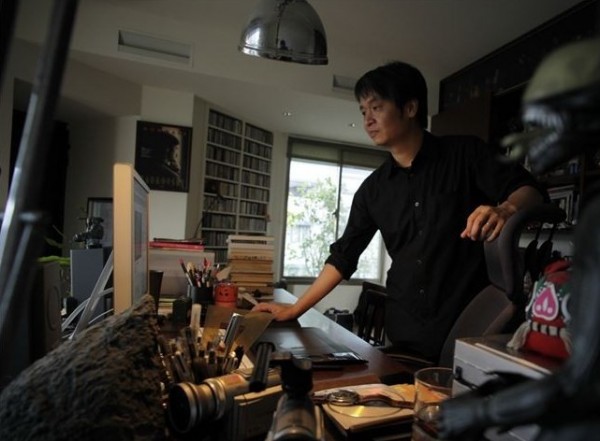 Sean Chuang is a prolific commercial director who became a published graphic artist by turning his experience in Taiwan's advertising industry into comic strips. Under the pen name Xiao Chuang (小莊), he later released acclaimed works including "The Window (窗)” and "80's Diary in Taiwan (80年代事件簿).”

Chuang was given the freedom to express himself through drawing since childhood, as his father was a fine arts teacher. After finishing high school, he attended Fu-Hsin Trade and Arts School because he performed better in art-related subjects.

Chuang started his career with Chang Shu A 8 V Production (長澍視聽傳播公司), where he rose to become a commercial director. After producing many advertising segments for China, Taiwan, Japan, and Singapore, Chuang's work journal scribblings were read by comic book editor Huang Jian-he (黃健和), who was participating in the same project by chance.

Chuang's graphic diary caught Huang's interest and he helped facilitate the publication of "A Film Maker's Notes (廣告人手記)” in 1997. The comic presenting Chuang's work and life through humorous images and text became an immediate hit and has since been reprinted 18 times.

In 2010, Chuang released "The Window,” Taiwan's first graphic novel that took him 10 years to complete. With a storyline set in Europe, the graphic novel pays homage to Europe's comics and scenery. A Spanish version of "The Window” was released in the following year.

Chuang then set out to record his childhood memories from the 1980s to the 1990s in his third novel "80's Diary in Taiwan (Volume 1).” The nostalgic scenes not only reflect the history of Taiwan, but also bring back the collective memories of those who were born in Chuang's time.

"80's Diary in Taiwan (Volume 1)” also caught attention at the 2012 Angoulême International Comics Festival. Though the story is set in Taiwan, cultural sensations such as break dancing, cassette tapes, and MTV that emerged in the 1980s were global. The graphic novel has been licensed and will soon be published in France and Germany.

In 2015, Chuang released "80's Diary in Taiwan (Volume 2),” offering twelve short stories that take readers back to some major pop cultural moments of a much-beloved era, such as the rise of Star Wars and the popularity of arcade video games. Because for Chuang, the 1980s was the golden age of Taiwan and he hopes to remind people of such history through the form of the comics.