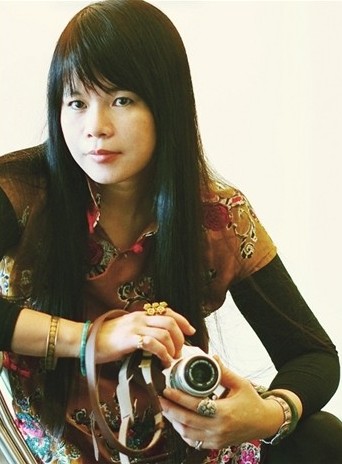 Chung Wenyin, one of Taiwan's leading contemporary writers, has received more than 10 literary awards, including one of the most important prizes in Taiwan - the Wu San-lien Literature Prize (吳三連獎) - in 2005.

Born in Yunlin in 1966, Chung had to relocate and transfer from school to school because of her family. After growing up, she started to travel abroad, and the overseas journeys as well as the changing of environments she experienced in childhood all became source materials for her writings.

Before Chung took the career path as a writer, she was a newspaper reporter, a photographer, and an art student in New York. In 1994, she received her first literary award, which led her to formally pursue writing by releasing several essays and novels with life and travels as the main theme. In 1998, she published a short story collection, "Two People in One Day (一天兩個人),” and a novel, "Woman Islands (女島紀行).”

Through many of Chung's writings, readers can "see” Taiwan, especially imagery of the southern part of the island. Using her memories, she depicts stories circling around a single village or city to reflect her thoughts on family, society, love, and personal values. Her novels usually evoke fantasy elements that are used as metaphors for the truth, while her essays tend to document reality.

For Chung, lover of freedom and the nomadic lifestyle, traveling is a way to encounter different cultures. For more than 10 years, Chung traveled around the world, but her nostalgia always brought her home, where she finally found peace and tranquility.

After her epiphany, she stayed in Taipei and finished her latest works - "The Island Trilogy (百年物語),” comprising "Decayed Lust (艷歌行),” "Decayed Land (短歌行),” and "Decayed Life (傷歌行).” The trilogy was written in memory of her passing youth; spanning from 1989 to 2009, each novel represents life in a different era. The history of Taiwan is illustrated through the perspective of the protagonists and reflects Chung's observations on society.

Now approaching her fifties, the vibrant writer plans to continue writing down what she saw and experienced abroad and in her homeland, transforming negativity into strength through the characters in her stories.