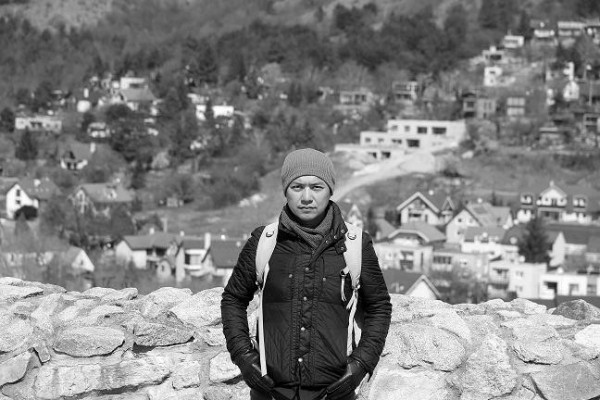 Wu Ming-yi is an award-winning author, professor, and naturalist whose works encompass fiction, prose, literary theory, and essays. Wu's debut novel, "Routes in the Dream (睡眠的航線)” was selected as one of the top 10 Chinese-language novels of 2007 by Yazhou Zhoukan (Asia Weekly), and the French debut of his international breakthrough, "The Man with the Compound Eyes,” was honored with the Prix du livre insulaire for fiction in 2014.

Holding a Ph.D. in Chinese Literature from National Central University, Wu has been teaching literature and creative writing in Dong Hwa University since 2000. The environmental activist also served as an executive council member of Taiwan Ecological Stewardship Association (生態關懷者協會) and a director of Kuroshio Ocean Educational Foundation (黑潮海洋文教基金會).

Wu's earlier works focused on depicting the struggle between free will and destiny through poetic prose writing, such as "We Are Closed Today (本日工休)” and "Grandfather Tiger (虎爺),” which comprised short stories presenting how individuals tackled difficulties in life.

Being a naturalist, Wu elevated the genre of nature writing in Taiwan with two of his most well-known essays - a "The Book of Lost Butterflies (迷蝶誌)” and "The Tao of Butterflies (蝶道).” Wu combines reality and history, as well as his observations and concerns in nature, to present not only scientific analysis but literary works that reflect kinship, love, friendship, and a sense of nostalgia.

In 2011, Wu released "The Man with the Compound Eyes,” a magical realism tale of love, humanity, nature, and the effects of human destruction on environment. The story resolves around an unlikely friendship and union between two different people - one from a mysterious island made of trash, and another from Taiwan's eastern coast - who meet after the two islands collide following a tsunami.

Different from his previous writing style, "The Man with the Compound Eyes” is a magical fable based on Wu's concerns on humanity and environment. Beautifully weaving a world of a blurred lines between imagination and reality, the 2011 release reflects his critical analysis on the island of Taiwan from subtle historical and cultural perspectives.

Wu noted that his inspiration of writing comes from his passion toward life, and that writing has changed his life. With this passion, Wu continues to create works with different themes and materials. "The Stolen Bicycle (單車失竊記),” Wu's latest novel that combines memories and reality to tell a journey under taken by a searching father and a roving bicycle, was named one of the two recipients in the Best Novel category of the 2015 Taiwan Literature Awards.