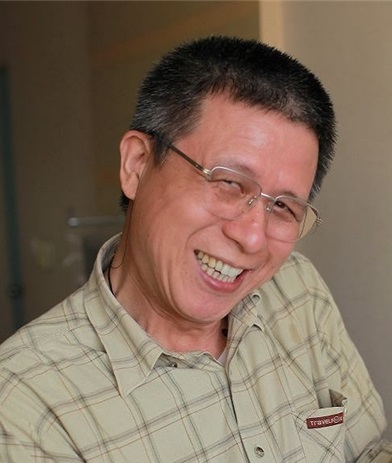 Chang Chieh-ming is a contemporary Hakka author of children's literature known for his use of humorous colloquial language and provision of translation, pinyin, and explanation in his stories. Dubbed the "Hans Christian Anderson of Hakka Literature," Chang has written numerous fables, fairy tales, novellas, and prose to revitalize the Hakka language, and garnered several prizes for his literary works in the past two decades.

Born and raised in a Hakka community in Miaoli, Chang often went with his grandfather to visit a friend who had a rich collection of books. Reading thus became Chang's form of entertainment while waiting for his grandfather. Among the collection, the earliest Hakka magazine ― Miaoli People Weekly (苗友周刊) ― was Chang's favorite and spurred his interest in Hakka books.

Chang later took up a job in a textile factory. While working, Chang also studied Hakka folklore and wrote stories in the Hakka language on a daily basis. He wrote his first fairytale when he helped his daughter write a speech for her Hakka speech contest. The speech, which was written in the form of a fairytale, won the top prize. Chang was thus encouraged to create Hakka literary works.

In 2004, Chang published a children's book titled "Little Hakka Mouse and Peanut (客家細老鼠同番豆)." Written in the colloquial Hakka accent of Miaoli County, the book takes an innovative approach, adding phonetics and Mandarin Chinese as well as translations and explanations to help readers understand the story. The book became used as educational material for teaching Hakka.

Chang has released various literary works since, including picture books and children's poetry integrating Hakka culture and knowledge. For example, Chang introduces the 24 Hakka solar terms in the short story "Grandmother Shopping for Mirror (阿婆買鏡)," providing detailed explanation at the end of the story.

Though Chang has been writing for more than two decades, he noted that writing in Hakka is still not easy for him. He has to "think as a Hakka" to "write authentic Hakka literature," he stated. He encourages young people to not only speak Hakka but also write in the Hakka language to promote and pass down the unique culture.