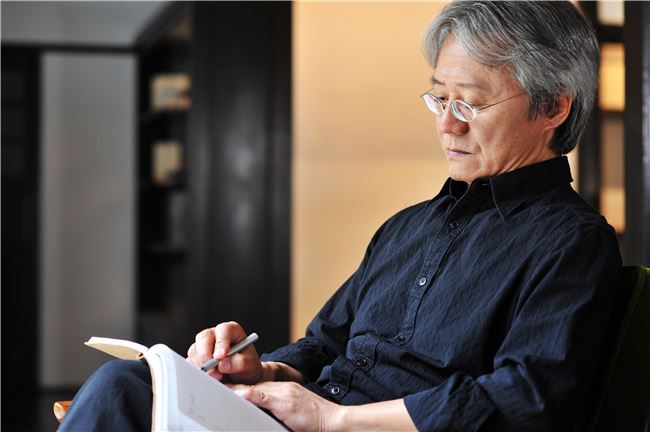 Lu Han-shiu (路寒袖) is a poet who is securing the inheritance of the Taiwanese language through modern poetry. For over two decades, he has been dedicated to combining Taiwanese poems with pop music, with more than 80 of his poems being turned into songs. He has set an example of interdisciplinary application of literature and music by bringing poetry into people’s everyday life.

Born in Miaoli and raised in Taichung, Lu left home to study at the Taichung Municipal Taichung First Senior High School after finishing junior high school. It was the time when he started reading a great amount of literary works by Taiwanese authors, including Wang Shang-yi (王尚義) and Lai Ho (賴和). He also formed the Muse Poet Society (繆詩社) to create poems.

By senior year of high school, Lu had decided to become a writer instead of going to the university as he believed that writing requires a richly seasoned life. Two years after that, he met prominent writer Yang Kui (楊逵) and got to stay at Yang's dwelling in Tunghai Garden for four months in 1977.

Living with Yang helped him see things from a different perspective. Though Lu never talked about literary creation with Yang, he was deeply inspired by Yang's philosophy and how he put ideas and philosophy into practice in real life. After leaving Tunghai Garden, Lu spent three months preparing for the university entrance exam and was admitted by Soochow University in 1978.

On campus, Lu founded Hanguang Poet Society (漢廣詩社) with a group of peers who shared the same literary interests. This period of time saw Lu's poetry techniques improve significantly, which helped him bring the ideas in his mind to life on paper, and established his unique style of writing.

In 1991, he created his first Taiwanese-language poem "Spring Rain (春雨)," which was later composed into a song by musician Chen Ming-chang (陳明章). Lu's ability to craft beautiful images with text impressed Taiwan's music industry, and he was provided with opportunities to write Taiwanese-language poems for singers signed by Crystal Records. He even penned campaign songs for mayoral elections.

Lu's knowledge of the language and appreciation for the motherland translate into poems that retain the elegance of poetry and highlight characteristics of the Taiwanese language. He remains prolific to this day, steadily presenting Taiwan's landscapes and people through the vivid imagery he paints with words.