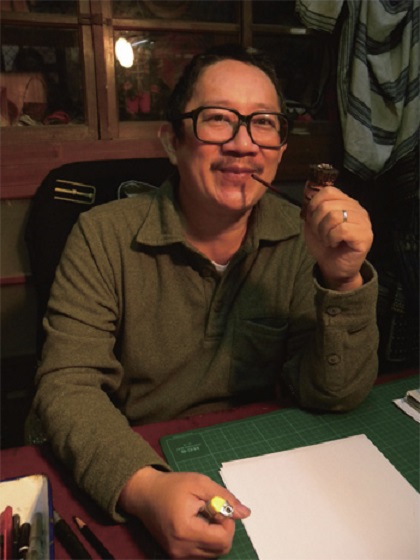 The Wushe Rebellion happened in 1930. Taiwan was under Japanese rule at the time, and driven by dissatisfaction among the local Seediq at the long-standing tyrannical rule by the occupying authorities, local chief Mona Rudao (莫那．魯道) led an alliance of local tribal villages in a large-scale uprising, razing the Japanese police posts and attacking the Japanese residents of the Wushe area.

"In the past, most people thought of the Wushe Rebellion in a stereotypical way, as being about 'brutality of savages' and 'cruel oppression by the Japanese.' Very few people thought about it in terms of individual values, or of the deep-rooted Seediq belief in gaya [the lessons and rules passed down by tribal ancestors],” says Chiu. Regardless of how future generations judge the historical truth, Chiu hopes that they will be able to see the incident from the perspective of the Seediq people.

Such sentiment has led Chiu to also pick up a video camera and shoot a documentary bringing together the oral history of the rebellion as remembered by its survivors, along with any remaining historical information. The end result was "Gaya," shot on 16mm film and completed in 1998, which earned Best Documentary at that year's Golden Horse Awards.

Later, he adapted several aboriginal myths and legends into animated form, as well as served as art director for the television series "Dana Sakura (風中緋櫻)" and art consultant for Wei's two-part epic "Seediq Bale," both based on the story of the rebellion.

By communicating history through comics with a commitment to historical accuracy, Chiu has helped revitalize the spirit of the Seediq people, and with translations of his comic into Japanese and French, he has also helped to relay a part of Taiwan's indigenous history and culture to an international audience.

"Culture shouldn’t be a thing simply played with as some kind of tourist attraction, nor should it be all about flashy external forms. Sometimes, culture is what is hidden away in the closets of the elderly. That is where the brilliant weaving and the moving tales are kept," says Chiu. "If you don’t put your heart into looking, then you might not see at all."