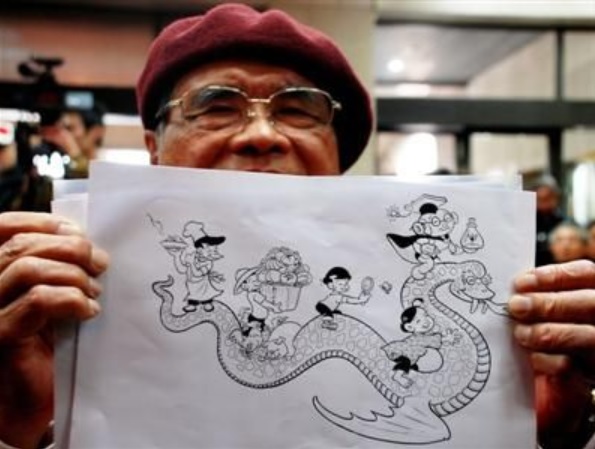 Born in 1934 in Hsinchu County during the Japanese colonial period, Liu Hsing-chin is now recognized as a prolific and inimitable cartoonist of Taiwan. He has produced many comics that have entertained numerous Taiwanese readers during childhood while his creative inventions have enlightened just as many.

The "Brother A-san and Big Auntie (阿三哥與大嬸婆)" and "The Robot and Ah-Chin (機器人與阿金)" comic series are the most well-known among his 200-some creations that encompass comics, fairy tales, and teaching materials.

Liu had a quick mind and a talent for drawing from a young age. When he was a young child, his father asked him to request a paper amulet from the gods at a neighboring village temple one day. Unfortunately, he damaged the amulet by accident on his way back home. He quickly borrowed a calligraphy pen and some ink from a nearby classmate to draw the amulet on another piece of paper. He succeeded in making a passable copy.

Liu began his career in 1954 shortly after graduating from Taiwan Provincial Normal School with an arts degree. He moved to San Francisco in 1991 and began serializing his "Big Auntie in the United States (大嬸婆在美國)" on "World Journal (北美世界日報)," a Chinese-language daily. In 2007, he also set up a "Great Auntie Creative School (大嬸婆創意學校)" in the Bay Area to teach Chinese Mandarin, Taiwanese, and Hakka for free.

In 2000, he helped Neiwan Village of Hsinchu County promote a new commercial district, which was intended to rejuvenate the village's lackluster tourism industry, by offering his humorous cartoon characters — Big Auntie, Brother A-san, and the Robot — as local mascots.

The new commercial district has successfully created tremendous business opportunities and jobs for the village and maintained the operation of the humble Neiwan Line of the Taiwan Railways Administration due to increased tourist numbers.

His other major effort in helping boost the village's economy was the symbolic NT$1 that he charged as royalty for licensing his iconic comic figures to eateries on the village’s old streets, helping them provide themed gourmet dishes unique to the region.

In 2017, the Hsinchu County Government opened a museum within Hsinchu Neiwan Elementary School for displaying Liu’s comics and inventions, a replica of Liu's studio, and audiovisual documentaries on the artist's daily routines. Next year, multimedia and reading sections as well as a comic-decorated elevator were added to help draw young cartoonists to join the village as resident artists. Future plans include the establishment of a creative marketplace for comics and spinoff products.

Liu stresses that the museum was established in the hope of perpetuating the unyielding spirit of artists and cultivating more homegrown cartoonists. Liu himself also illustrates Taiwanese folk activities and has so far created over 300 of such works.

In a career spanning half a century, Liu presents the lifestyles of ordinary Taiwanese folks in the olden days in a humorous way, documenting various subjects including humble but practical crafts; easy, pleasant rural lives; and buzzing temple festivals. They reflect the looks of Taiwan's folk arts, cultural festivities, and popular entertainment for decades while leaving vivid records for Taiwan at the crux of generational crossovers.