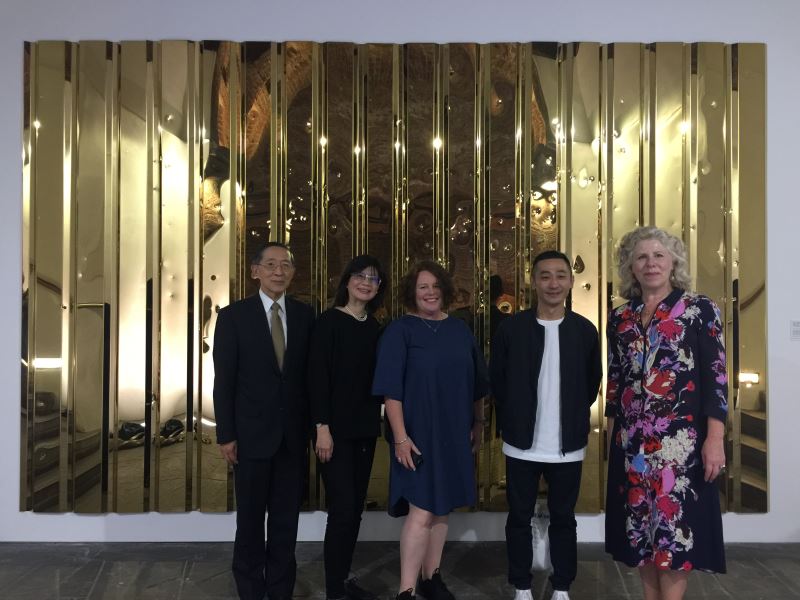 Born in Taiwan in 1976, Chou Yu-cheng graduated from the National Taiwan University of Arts in 1999 before embarking on the Ecole nationale supérieure des Beaux-arts de Paris research program La Seine in Paris, France.

A specialist in manipulating the pairing of aesthetics and society, Chou's works emphasize the effort behind visual styling, focusing on the production of alternative modes of thinking and doing within existing systems and the corresponding interests generated therein, while also revealing the problems with reality as it exists.

Through a variety of media, such as installation art, publishing, performance, and painting, Chou reveals the characteristics of art, objects, and space, presenting the profound meaning of the dialogue between aesthetics and society. His works not only highlight the processes that underpin design, but also brings out the contrary thinking from within established things.

He works in a broad range of media, often acting as a sort of "intermediary," blending what he sees as his "subjects" — individuals, enterprises, and institutions — and producing a dialectic between source and result through transfer or transplantation, or through differences in time and place. This method is what Chou calls his "design trick."

In 2018, he participated in the 10th Liverpool Biennial, the largest contemporary visual art exhibition in the United Kingdom. Chou, who was invited to create a new piece on-site in Liverpool, thus became the only artist from the greater Mandarin-speaking community to take part in the exhibition.

With the support of the Ministry of Culture and the Culture Division of the Taipei Representative Office in the UK, Chou exhibited his work at the historic St. George's Hall in the heart of Liverpool. The piece was titled "Chemical Gilding, Keep Calm, Galvanise, Pray, Gradient, Ashes, Manifestation, Unequal, Dissatisfaction, Capitalise, Incense Burner, Survival, Agitation, Hit, Day Light."

With eye-catching terms like "unequal" and "survival" in the title, the site-specific installation showcased the problems of ordinary people in modern society like economic hardship and unemployment, while the distortion created by the galvanized steel plating served as a metaphor for the distorting effects of image manipulation software like Photoshop. The low-cost construction materials so commonly used in Taiwan were a reference to to the rich-poor divide and overcrowded urban life.

The 43-year-old was invited to participate in the 2019 Lyon Contemporary Art Biennale as well. His site-specific installation — "Goods, Acceleration, Package, Express, Convenience, Borrow, Digestion, Regeneration, PAPREC Group" — was created using approximately 250 tons of discarded cardboard to engage the themes of reuse, recreate, and reengineer, prompt re-evaluation of industrial ecosystems, and illustrate the monetization of human relations.

Through his works, Chou presents a new way to observe this vast world, helping viewers seek out the ties amongst venues, objects, and emotions. This model of perception is born of the interweaving of various connections and can be used to observe the many faces and facets of the human society.