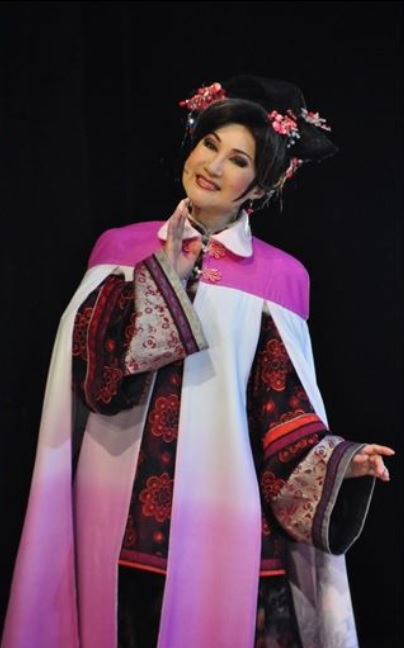 Chen Feng-kuei, who goes by the stage name Hsiao-mi (小咪), is a recipient of the highest honor in Taiwan's traditional art world — the best artist award at the Golden Melody Awards for Traditional Arts and Music. The title is well deserved, as she has demonstrated a fully rounded set of talents in the realm of koa-á-hì, excelling in both singing and acting whether performing indoors or out. She is adept at adjusting her physical expression and vocal timbre to meticulously match her various roles and scenes.

The Hard Journey to the Stage

Known as an "actor of a thousand faces," Hsiao-mi joined the E. Sha Musical Theater (藝霞歌舞劇團) troupe as a student before she was 14 years old. When she was just six, her natural gift for acting saw her perform full shows during the day, and by night she would accompany her father singing nakasi, honing her voice. Under the tutelage of choreographer Wang Yue-hsia (王月霞), she quickly became one of the divas of the E. Sha troupe.

Founded in the early 1960s, the E. Sha Musical Theater troupe soon gained popularity across Taiwan and even into Southeast Asia, becoming on par with Japan's Takarazuka Revue. Once, when the troupe was in Taichung, Hsiao-mi's mother saw the performance and began to think to herself, "Why not let my little girl learn to do this too, later we could open a dance studio and she could be a respected teacher." With this in mind, she sought her daughter out.

"I was just 13 at the time," Hsiao-mi recalled. "I was just a tiny little thing; the troupe didn't even want me. Later someone we knew recommended me and I started doing odd jobs for them, like washing dishes, cooking meals, and helping the actors put on their costumes. It was really a kind of four-year unpaid 'internship'." Throughout, though, she told herself that the stage would be hers one day.

E. Sha's performances run the gamut: period to modern, every kind of dance from ethnic to ballet, jazz, and modern, and songs from pop and folk to enka, Taiwanese classics, and koa-á-hì. Under the training of troupe choreographer Wang, Hsiao-mi soon became one of the most capable performers in the troupe.

She proved a keen observer of other people, and as such, she was able to take on virtually any role.

Finding Her Place in Koa-á-hì

In the 1970s, the real-estate boom in Taiwan led to a reduction in the number of performance spaces available. Coupled with television programs emulating their performance methods, troupes like E. Sha found their audiences begin to drop off, the troupes fading into memory as one by one they closed down. In 1985, Hsiao-mi made the transition to televised koa-á-hì, later turning her focus to koa-á-hì on stage.

"I never really trained in koa-á-hì," she explained. "So at first, my performances had a bit of a pop music flavor. Later I put in more work honing my dialogue and singing, and that, combined with having been a dancer since I was little, led to people saying my performances of new, modern shows were very much 'alive.' As soon as I step onto the stage, I just put my whole self into the performance."

After years of hard work, she was recognized in 2016 with the best artist award at the Golden Melody Awards for Traditional Arts and Music. "I want to tell my mother that there is still a future for koa-á-hì, and that as long as one works hard, one can blossom like a flower one day."