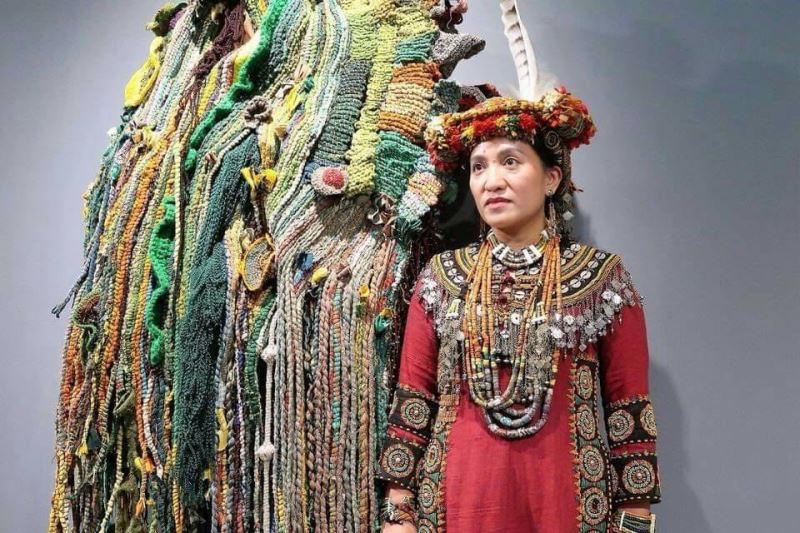 Name: 武玉玲
Born: 1971
Place of Birth: Paridrayan Village, Sandimen Township, Pingtung County
Did You Know...?
According to the creation myth of the Paiwan people, they are the descendants of the sun. Leadership is hereditary and may be passed down to male or female heirs alike, known as the "son of the sun" or "daughter of the sun" respectively.


Aluaiy Pulidan hails from the family of the leader of the Paiwan Paridrayan Village in Pingtung County’s Sandimen Township. She is most well known, though, as an artist, and likes to call herself the "daughter of the sun." From a young age, she knew how to make necklaces, garlands, and other decorations from leaves and dead branches she had picked up. And thanks to her background as a Paiwan leader's heir, she has a greater familiarity with her people's clothing, particularly for celebrations. Her grandmother always helped her with complete traditional outfits, carefully explaining the symbols in each piece of clothing and jewelry and their significance. In addition, her mother is very good at deconstructing all kinds of clothing and using them to create new outfits. Gradually, through all of this, the seeds of Aluaiy Pulidan’s artistic future were sown.

In 2009, Typhoon Morakot wreaked havoc on the village, and Aluaiy Pulidan headed back home as soon as she could. As well as taking part in the rebuilding, she established her "Daughter of the Sun Cultural and Creative Space," focused on the design of large installation pieces, providing local tribes a place to come together to enjoy the creative and therapeutic aspects of art. Aluaiy Pulidan and her studio work to continue her people's traditional culture and lead more people in caring for their hometown and their land.

After graduating from the Master's program in Fashion Design and Management at Pingtung University of Science and Technology, Aluaiy Pulidan won the 2018 Pulima Art Award.

Aluaiy Pulidan's work includes several particularly important features. First, on the technical side, they are all assembled by "winding" objects, a method she was taught by jewelry designer Li Fangyu. As a student of Li, she found herself often making the journey north and back following her teacher. For Aluaiy Pulidan, these winding lines are like bloodlines, hard to cut and full of warmth. Working with other women of the tribe in the creative moment, they attempt to stitch together the land and their regrets about their lost home.

Furthermore, in terms of themes, Aluaiy Pulidan's works always focus on women, telling her own life experience. For example, she likes to use brides as protagonists, designing wedding dresses with beads and tassels, combining them with traditional animal bones, agate, and silver jewelry, giving new life to these traditional accessories.

In recent years, Aluaiy Pulidan's pieces have received many awards in Taiwan and have been exhibited in many places. This year, she represented Taiwan in participating in the Yokohama Triennale, exhibiting five sculptures including "Axis of Life," showcasing the resilience of female life and its intimate connection with the land to much praise from foreign artists.