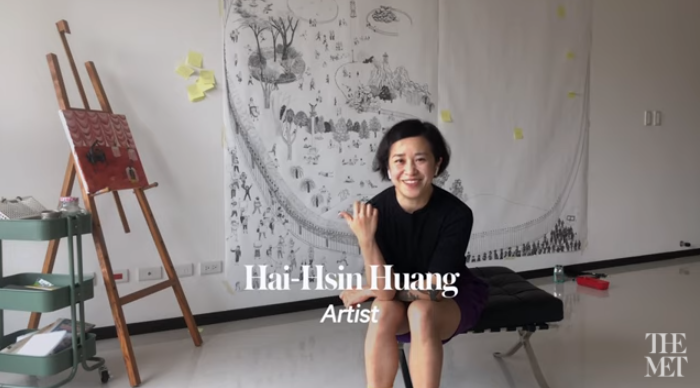 Name: 黃海欣
Born: 1984
Place of Birth: Taipei City, Taiwan
Did You Know…?
In 2016, Huang Hai-hsin gave an exhibition of her painting series "A Museum Show" in New York. With playful, humorous brushwork, she depicted the various types of people visiting museums, from people in long queues at the entrance, those glued to their phones in the halls, to glamorous ladies from the Upper East Side. The amusing artworks aroused a rapturous response from audience and collectors alike.


Huang Hai-hsin graduated from the National Taipei University of Education in 2007, having started her undergraduate studies with absolutely no academic background in art whatsoever. She had wanted to attend art classes in junior high school, but she never went beyond just thinking about it. When she tested for university, her first choice was actually advertising. However, it didn't go as planned, and she ended up in NTPUE. While there, even though she was one of just a few students of the section of art creation of the Department of Art and Design, she didn't end up making too many works. Finally in 2005, she officially made public a series of works themed around "escape," for the first time.

In 2009, she graduated from the School of Visual Arts in New York with a Master of Fine Arts degree, and has since lived and worked in Brooklyn, New York. She won an award at the 2011 Taipei Art Awards, and in recent years she has held solo exhibitions at Art Basel in Hong Kong, Capsule Shanghai, Museum der bildenden Künste Leipzig (The Museum of Fine Arts Leipzig), and the ISE Cultural Foundation in New York. Huang has been invited to exhibit her works in Taipei, Kaohsiung, Tokyo, Seoul, Leipzig, Paris, New York, Shanghai, Hong Kong, Israel, Kyoto, and other places, and her works are in the collections of Australia's White Rabbit Gallery, Germany's Museum der bildenden Künste Leipzig, Taipei Fine Arts Museum, National Taiwan Museum of Fine Arts, and Yageo Foundation, among others.

Living in New York, Huang finds herself more interested in things happening in Taiwan and keeping abreast of the news online is something of a hobby for her. Whether on television, in print, or online, the form in which the news is presented and the content therein reflect how the people of the country see the world, their ideology, and their values. Huang uses simple and powerful brushstrokes to present an unfamiliar side of Taiwan.

Huang's "Small Event" series focuses on online news, and through its quickly painted style, it freezes our impressions of the events depicted, of the strange stories and big national events, all reflecting the attitude of Taiwanese towards the world. Legislators fighting in parliament, politicians bowing in apology, celebrities being arrested for doing drugs, dioxin-contaminated ducks, drunks mistaken for dead bodies... no matter how wild, they're all things that were in our news. Through these quick, one-shot depictions, Huang Hai-hsin captures the splendor and vitality of Taiwan. For all their understatement, they are still unmistakably Taiwan.

Her goal is not just to show her perception of Taiwan, but even more, to present the conditions in which people live. As a Taiwanese artist, Huang Hai-hsin's work really does capture a spirit that is particularly to this land, from the choice of topics to the way they’re expressed, the ordinary things that we are all so accustomed to. Her works all draw from everyday life, and through her playful and cringe approach to humor, her paintings have a certain unique association between one another. All kinds of odd freehand details unfold in them, and while they may seem like flights of fancy, they are, in fact, all based in reality. Her early works were heavily influenced by antique photos, thumbnails from the Internet, and other such references; later, she abandoned her attempts to faithfully reproduce the quirky atmosphere of those old images, with her newer work characterized by simple, bright scenes that are as concise as they are powerful. Working in the outlines, she focuses on recording the possibility and absurdity in the modern social structure, a strange and barren land that resists exploration through reason and logic.

In addition to depicting various pieces of news from Taiwan, Huang also takes inspiration from books and magazines. Some of her works are even based on pictures she herself took. For example, her "Red Rope Knots" series draws on educational materials, while the "For Your Own Good" series mostly comes from briefing documents of medical units. These file photos depicting a healthy and happy world are transformed by Huang to reveal a sickly, gloomy atmosphere. The falseness of the excessive positivity imbues the colorful, joyful scenes with an odd feeling.

Today, Huang not only paints, but also restores antique prints. Sometimes she plans exhibitions with friends. In the future, she aims to continue this creative life, equal parts hard work and pleasure. Whether aimed at ourselves, at Taiwan, or at humanity as a whole, self-deprecation amid tough times seems to have a particular power. If there is anything worth working for in this trash fire of a world, it must be trying to find some little bit of joy to keep us going, a bitter smile in the face of disaster.