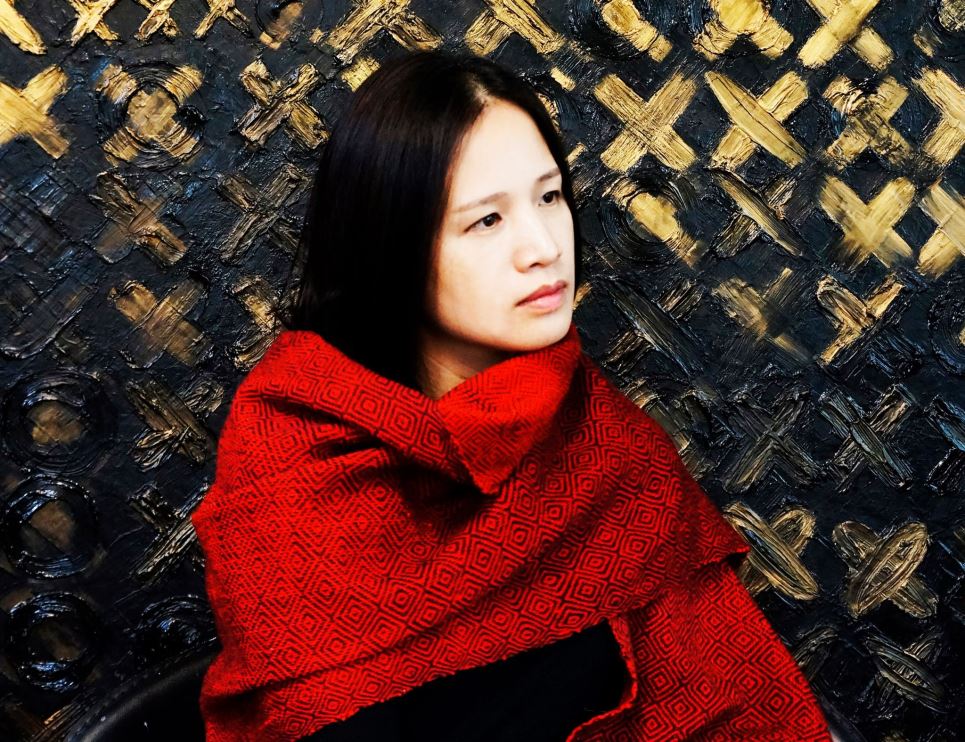 Name: 宜德思・盧信
Born: 1976
Birthplace: Hualien City, Taiwan
Did You Know That…?
Symbolism in art is a visual language used to depict pictures. Idas Losin (宜德思・盧信) is an indigenous painter who is extremely passionate about people and the social environment. Every special symbol or picture drawn by her represents the history of a language, an ethnic group or an individual.


Idas Losin (宜德思・盧信) is an indigenous artist of the Truku and Atayal tribes in Taiwan. She specializes in western paintings, which she has painted using a variety of art media to express her concerns for environmental protection, land reform issues, and her origins.

Idas's mother is from the Truku tribe, while her father is from Atayal tribe. She was brought up by her grandmother in Hualien. After graduating from junior high school, she left Hualien and enrolled into Fu-Hsin Trade & Arts School where she studied arts and crafts. Later on, she continued her studies at Taipei National University of Arts and worked on documentary films about Taiwanese tribes, focusing on the stories of the elders.

Upon completing her undergraduate studies, she commenced her career of artistic pursuit in 2001. She believes that the duty of contemporary indigenous artist is to portray the true side of people's everyday lives and present readable visual language through artistic expression. She was further motivated to create indigenous art when she came across a painting drawn by the indigenous people from Australia at an exhibition in Taipei in 2003.

The style of her artwork is deeply influenced by Taiwanese aboriginal art, traditional culture and her identity. The themes of her works range from expressions of aboriginal identity — incorporating tattoos, textile or woven patterns and other cultural objects — to dreamlike renderings of island settings and seascapes. Besides that, Idas also uses totem symbols, patterns, blank spaces and a variety of art media, applying contrasting colors to emphasize her love and care for aboriginal culture, women, environment and the land.

Between 2005 and 2009, Idas continued her studies in Australia where she was exposed to Australian aboriginal art. Idas describes her engagement with Austronesia as a learning process, one that offers new perspectives on creativity and identity. She also traveled to Chile to broaden her horizon, contemplate about her life and her identity as an indigenous Taiwanese. When she returned to Taiwan, she partook in several art events, including National Dong Hwa University’s international culture event "Autumn Balaifam" and a new generation women's creation exhibition "Interwoven memories (交織的記憶)" at Wulai Atayal Museum (烏來泰雅民族博物館), among others.

In 2012, Idas created an artwork titled "Symmetrical relationship of the body and soul (身體與靈魂的對稱關係)," she was awarded first prize in the Pulima Art Award. This piece of artwork is based on the life experiences of the village elders that she spoke with during her visits to the mountain tribes. It is a reflection on the past history of ethnic groups. The images drawn in the artwork are portrayed as an observing subject, as well as an object being observed, this became a special characteristic of her artwork. In the same year, she was invited by Kaohsiung Museum of Fine Arts to join in the multi-cultural arts development program to become artist-in-residence, together with Truku tribe artist Dondon Hounwan (東冬．侯溫) and two Maori artists from New Zealand, George Nuku and Tracey Tawhiao.

Besides Idas's contributions in the art sector, she pays close attention to the rights of indigenous people, often participating in the related movements and holding solo photography exhibitions. She uses photographs to discuss social issues, including ethnic identity, historical sentiments and self-reflection, and to express her concerns.

Driven by her curiosity, Idas started a life-long island hopping art project in 2013, visiting Pacific islands and building close connections with the aboriginal residents. Thus far, she has visited New Zealand, Tahiti, Hawaii, Guam, Easter Island and other islands. Through travels and field researches, Idas has explored the past and present lives of indigenous people, and then transformed her experiences and findings into different pieces of artworks. She has been inspired by other people's perspective on life, and also the things and people that she encountered locally or abroad.

She has been invited to participate in important exhibitions in major domestic and foreign art museums, as well as public and private exhibition institutions around the world. She has shown her works in the National Taiwan Museum of Fine Arts, Kaohsiung Museum of Fine Arts, Asia-Pacific Triennial of Contemporary Art in Brisbane, Australia, as well as the Jean-Marie Tjibaou Cultural Centre in New Caledonia, to name a few.

In 2019, She held a solo exhibition titled "Island Hopping, Fantasy and Milky Way (跳島 幻島 天河)." On display were 43 works created in the last 15 years, including landscapes and images which record her observations of Pacific cultures and express her concerns about land justice and environmental issues. Her most recent works depict the conditions of human survival in today's state of global warming.

Idas shows distinctive personal style in her works. Although she would use traditional patterns and wordings, her works do not fall into the old-fashioned stereotype. Instead, her works highlight the accuracy of conceptual art framework and processing techniques, as well as the integration of her identity and artwork, which is formed through her transnational experiences. Her unique artistic style has received affirmation and opened up a new aspect for Taiwan's contemporary aboriginal art.