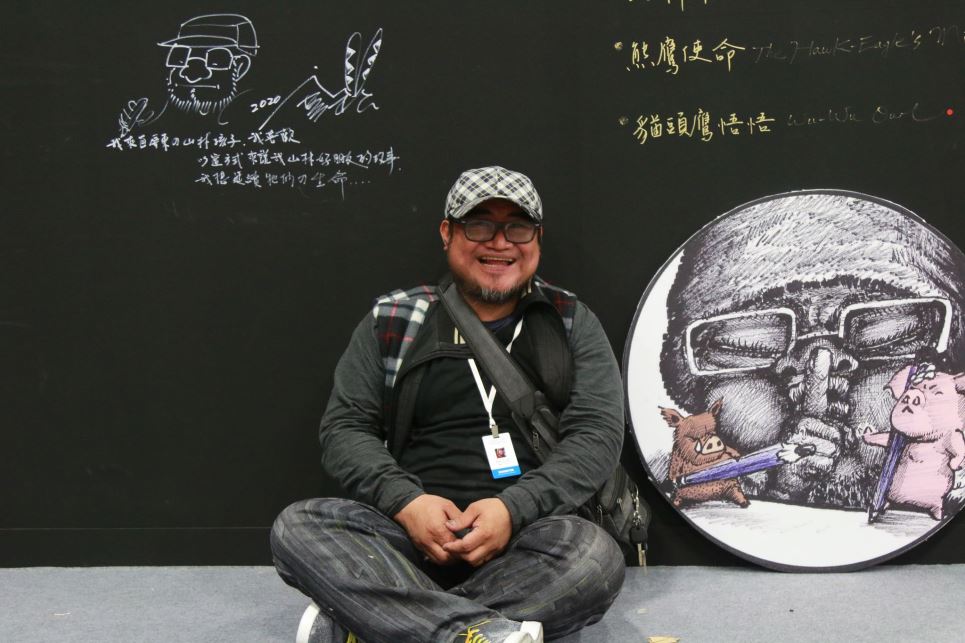 Name: 杜寒菘
Born: 1977
Birthplace: Pingtung
Did You Know That…?
Pacake Taugadhu is enthusiastic about preserving Taiwan's aboriginal culture and history through artistic expressions. He has a diverse art style, ranging from drawing cute animals to serious artworks that explore issues pertaining to the indigenous community. Through variation of ways, he hopes to preserve the life stories of the elders in the indigenous tribe and to attract attention to their culture and traditions, so as to safeguard the tribe and the natural environment.
Site: http://www.dpsunltd-online.com/


Rukai artist Pacake Taugadhu was born in Kucapungane tribe (好茶部落) in Pingtung, southern Taiwan. Kucapungane is one of Taiwan's indigenous village on the North Taimu Mountain in Southern Taiwan. The tribe has lived in Kucapungane for about 7 centuries. Taugadhu's father is a craftsman who specializes in building stone slab houses. Although he went to school in the city, he has been closely related to his tribal background because his parents always speak to him in their tribal language and would tell him stories about the tribal village and the family.

Taugadhu displayed artistic talent since young, but he found that he often picked the wrong colors to paint. Thus, he started to focus on sketches and layers of light and contour. He did not know the reason of having difficulty distinguishing between shades of red and green until he underwent a physical checkup in order to apply for joining the military and police force. He was disheartened by his color vision deficiency and gave up drawing at the time.

Later on, Taugadhu returned to the tribe and learned the skills of building stone slab houses from his father. He participated in restoring the stone houses and paths in the village, and in the process, he was inspired to pursue the traditional culture of Rukai and search for his cultural roots. He believes that it is his mission to preserve the tribe’s cultural heritage through artistic expressions.

However, he developed a rebellious mentality and sparred with people, which eventually led him to eight years of imprisonment. Being put behind bars, he started to think about his life in the tribe and resolved to pick up his paintbrush again. He completed hundreds of paintings and sent them to his family. The subjects of his artworks were mostly his memories on the tribal stories and Rukai community.

In 2009, Typhoon Morakot struck central and southern Taiwan, causing severe flooding and landslides which destroyed Rukai tribes' village in the mountains. Villagers were forced to relocate to the Rinari Village. The relocation completely changed their lives and disintegrated the culture and traditions of the tribe. This unfortunate event further inspired Taugadhu to turn his memories of the village into artworks. Through his works, he hopes to reunite the villagers and help them make through the tough phases of post-disaster recovery.

With the goal of promoting awareness of indigenous culture and language, Taugadhu published a picture book in 2013 titled "Maca Ki Umu (伍姆的嘛喳)," which means "grandfather’s eyes" in Rukai language. It tells the story of the tribe's love and respect for nature, as well as courage in the face of challenges and frustrations. Three years later, he published his second book "Lrikulau (里古烙)," or clouded leopard. It depicts a loving relationship between a sculptor and an orphaned clouded leopard cub. Both publications were showcased at the Taiwan Pavilion during the Bologna Children's Book Fair in Italy in 2015 and 2017.

Taugadhu introduced a vending machine that sells picture books featuring the Rukai tribe culture in Pingtung in 2016. He pointed out that many tourists wanted to learn more after the tour, but there were no bookstores in the village. Therefore, he came up with the idea of installing a vending machine, hoping that it can help visitors understand the tribe better.

Additionally, to make aboriginal culture and tradition easier to understand for the public, Taugadhu created an artwork series of 13 animal-based original characters titled "Companions of the Forest (山林好朋友)." He used these animal-based characters to tell stories about the culture, tradition, rituals, interpersonal interaction of the Rukai tribe. Through this creation, he has conveyed messages of positivity and joy, hoping to garner interests and attention, so that more people would be interested in the aboriginal culture and heritage. The characters included in the series are based on clouded leopard, wild boar, lowland pig, hundred-pacer snake, owl and flying squirrel.

In 2016, Taugadhu won the first prize of Pulima Art Award with his sculpture titled "It Is For The Child, Don't Take It Please! (那是留給孩子的請別拿走!)." The artwork is a reminder to visitors to the tribal village that they must not stone slabs from the tribal houses. With the recent boom of tribal village tours in Taiwan, it is found that some tourists have taken away stone slabs from the houses in the tribal village as souvenirs. Taugadhu hopes to remind tourists to show respect for their culture, and refrain from taking the stones away as each stone slab is a gift of the historical and cultural legacy that the ancestors left for the descendants in the village.

Throughout the years, Taugadhu has produced many paintings, sculptures and three picture books with themes inspired by memories of tribal life and tales recounted by his parents and other elders in the village. His artworks are also featured in Taipei MRT station and he has decorated the outer walls of the Rinari Tourist Centre in Pingtung.