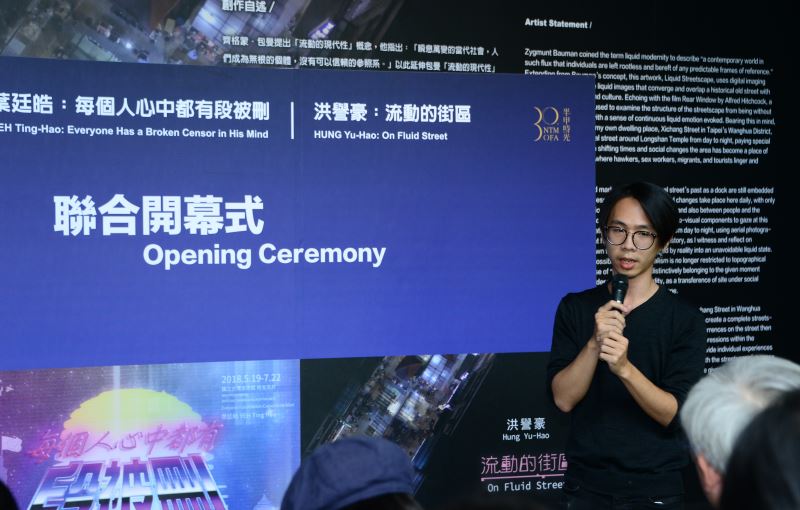 Name: 洪譽豪
Born: 1989
Place of Birth: Taipei, Taiwan
Did You Know That...?
Virtual reality has applications that extend beyond just video games—more recently, the technology has been expanded to movies as well. In "Wolves in the Walls: It’s All Over (牆壁裡的狼：逃亡篇)," for example, the female protagonist encourages audience to take part in the actions in the movie, helping to find proof of the titular wolves in the walls. In Taiwan, meanwhile, an artist has combined drone photography, 3D scanning, and virtual reality to create images of Taipei City's Wanhua District that can be explored free of the bounds of time. This unusual and engaging piece of visual art presents audience with the chance to experience this old district of Taipei City from a variety of angles through virtual reality devices, and the artist creating this work is Hung Yu-hao (洪譽豪).


Hung Yu-hao (洪譽豪) was born in Taipei City in 1989 and graduated from the National Taiwan University of Arts with a Master's degree in New Media Art. The themes of his creative works primarily focus on the virtual and the real in the context of new media, and particularly those as they are expressed through geographical imagery, after long years of observation of the urban scenes in Taipei City's Wanhua District, which is a highly developed but aging urban area. Through his series, Hung has created the dialogue of images of street scenes rich in history and memory, cultural imagery with local charm, and his own life story.

In 2018, Hung held his first solo exhibition in Taichung, engaging the audience in a dialogue through his work "On Fluid Street (流動的街區)." In an interview, he said that "this piece is an extension of Zygmunt Bauman's concept of 'liquid modernity' that modern society is in a constant state of flux, and individuals feel rootless since they don't have a reliable frame of reference." This piece is thus mainly focused on Wanhua District's Xichang Street, where, in his observation in daytime as well as in the night, the community across the vicinity of Longshan Temple has gone through social transitions and is becoming a fluid place of contemporary religious belief, mobile vendors, sex workers, immigrants, and tourists. Fluidity ultimately replaces order and individuals collectively amplify the experience of atomization.

In 2020, Da Xiang Art Space (大象藝術) hosted "Pathfinding between Phases—Hung Yu-hao Solo Exhibition (相位尋逕-洪譽豪個展)," which included the work "Drift II (巡者II)." This piece employs a semi-transparent approach because the source information was a bit cloudy. It uses an aggregate of points to create 3D surfaces for both street scenes and buildings alike, a deliberate choice aimed at reflecting the cultural fragments that drift through these streets and how the piece is pushing them back together. Through the contradictory interactions of these multiple images, the artist creates a kind of historical setting of his own.

In "Pathfinding between Phases," Hung not only exhibited his works, but also set up the first seminar workshop on 3D scanning, not only explaining the principles and concepts involved, but also leading students through downloading the necessary software, photographing items on site, and inputting them into that software. Through this, he gave students a first-hand experience of taking flat, 2D images and transforming them into 3D entities, thus helping them better understand the creative process behind his own works.

Also in 2020, Hung participated in the Museum of Contemporary Art Taipei's exhibition "Perforated City (穿孔城市)," curated by Huang Hai-ming. This exhibition aimed to "perforate" the city to offer a more active perspective or sense of control. For his piece "Wanderland (無以為家)," Hung began with having overheard something an older homeless lady under a store verandah had said, which spurred him to think about whether people’s imaginations about residence have their own different images and different limitations. He took used items from his home and used them to recreate a verandah scene in hopes of creating a correspondence with the residents of Wanhua, penetrating the layers of the city's quadrants to become someone’s home that you pass by every day.

In 2017, Hung received first prize in the Photography and New Media Art category at the Keelung Fine Arts Exhibition (基隆美展). The following year, he took gold in the New Media Art category at the National Art Exhibition (全國美術展-新媒體藝術類), and distinction at the Brainstorming Contemporary Arts Award (集思廣義當代藝術賞). In 2019, he was again honored, this time with a distinction in the Kaohsiung Awards' (高雄獎) New Media Art category. Since then, he has continued to focus the scope of his work on the present, legacies, and preservation, exploring the scars of history left imprinted on the city and calling back to different axes of time and the memories of the streets.