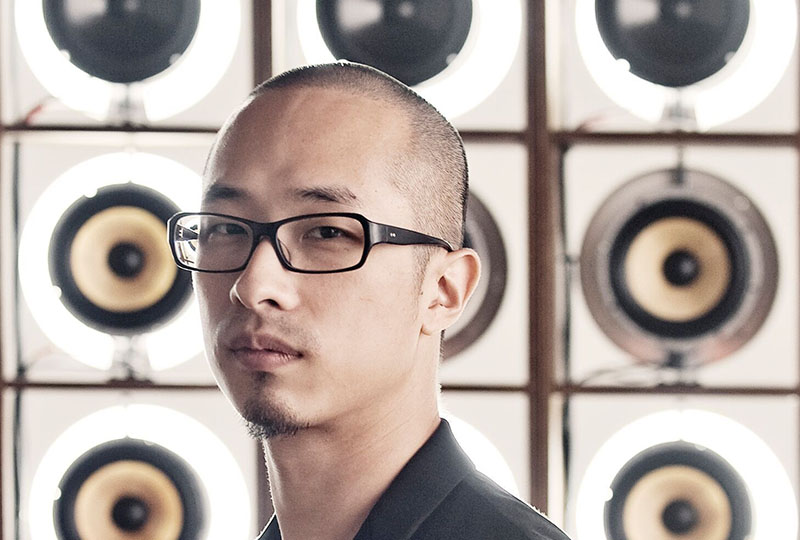 Name: 姚仲涵
Born: 1981
Birthplace: Taipei
Did You Know That…?
Yao Chung-han was originally an Interior Design major, but his interest in light and sound led him to switch over to Art and Technology as a graduate student. Heard through his ears and his microphones, sounds that most people consider noise, like the sound of air conditioners running, cars driving past, and lights flickering on and off, are transformed into treasures. He has also found that through post-production, low-, medium-, and high-pitched noises can be tweaked and twisted to create melodies.


A graduate from National Taipei University of the Arts’ Graduate School of Art and Technology, Yao Chung-han (姚仲涵) has become an active new media artist in recent years, with a particular specialty in combining sound and space in installation art. He is not only an artist, but also an assistant professor in the Department of Architecture at Shih Chien University, his undergraduate alma mater.

When Yao was himself a student at Shih Chien University majoring in Interior Design, his professor encouraged him to incorporate sound as an architectural material in his graduation project, designing an interactive installation of light and sound, using light to make sound visible. After this, he decided to continue building on this interest and experience as a graduate student, joining the graduate program in Art and Technology at Taipei National University of the Arts.

During his graduate studies, he happened to notice a flicker and a subtle sound for a few seconds when the lights were turned on and off, so he decided to try recording the sound with a microphone. And thus, an ordinary lighting fixture became a source of creative inspiration for the young artist. He amplified the sound with his computer and could clearly hear the erratic flickering and noise when the light was turned on and off. To the average person, that noise sounds “broken,” but to Yao, it is like the language of light fixtures. The indescribable sense of uncertainty in things like this is what fascinates Yao, as well as being what inspires his imagination around sound.

Since 2005, Yao has been working with noise and sound, using lighting as a material to create a sense of futuristic technology. His works span light and sound installations, sound performances, and musical productions. The process of making things with his hands is something he has always loved, he says, and the act of creating something has an incomparable appeal to him. The architectural training he received during his undergraduate years, including in drawing and model making, has also helped hone his ability to observe and understand space. He has always created his works through a combination of his senses, rational observation, and creative insight, transforming his experiences into pieces that can communicate with audiences.

For his early performances, Yao designed a special device with a laser light and sensor to control a white-light lamp. In this device, he installed an additional sensor that translated the position where the laser light was blocked into a frequency parameter, enabling the lamp to generate different sounds. He would move his hands in different positions across the laser light, as if he were a pianist playing the light like keys.

Since he began his creative endeavors, Yao has received many awards, including the Sound Art Prize at the 2008 Digital Art Festival Taipei and the 2007 S-An Art Award, as well as being selected for the 2008 Taipei Arts Award and the 2006 Seoul New Media Festival. He has been invited to have his works featured in the Fukuoka Asian Art Triennial in Japan and STEIM—Massive Light Boner in the Netherlands, as well as having works presented in a number of international exhibitions. His installation pieces have been exhibited at Taipei Fine Arts Museum, the Museum of Contemporary Art Taipei, and the National Taiwan Museum of Fine Arts in Taiwan; Gwangju Museum of Art in South Korea; Fukuoka Asian Art Museum in Japan; and Shanghai Art Museum in China.

Creation is part of Yao Chung-han’s life, from seemingly broken fluorescent lamps to vibrant white lights, from the composition of deconstructed sound art to the production of dance music, from framed works to works that reflect on concepts of spatial scale. He employs the corresponding and contrasting relationships between light and sound to inspire viewers of his art to go on flights of imagination about what the physical senses perceive and understand. He is also the co-founder of the Lacking Sound Festival, a significant contributor to the world of sound and experimental art in Taiwan. He has dedicated himself to the development of the sound art scene in Taiwan, while at the same time continuing to perform and exhibit his pieces around the world.