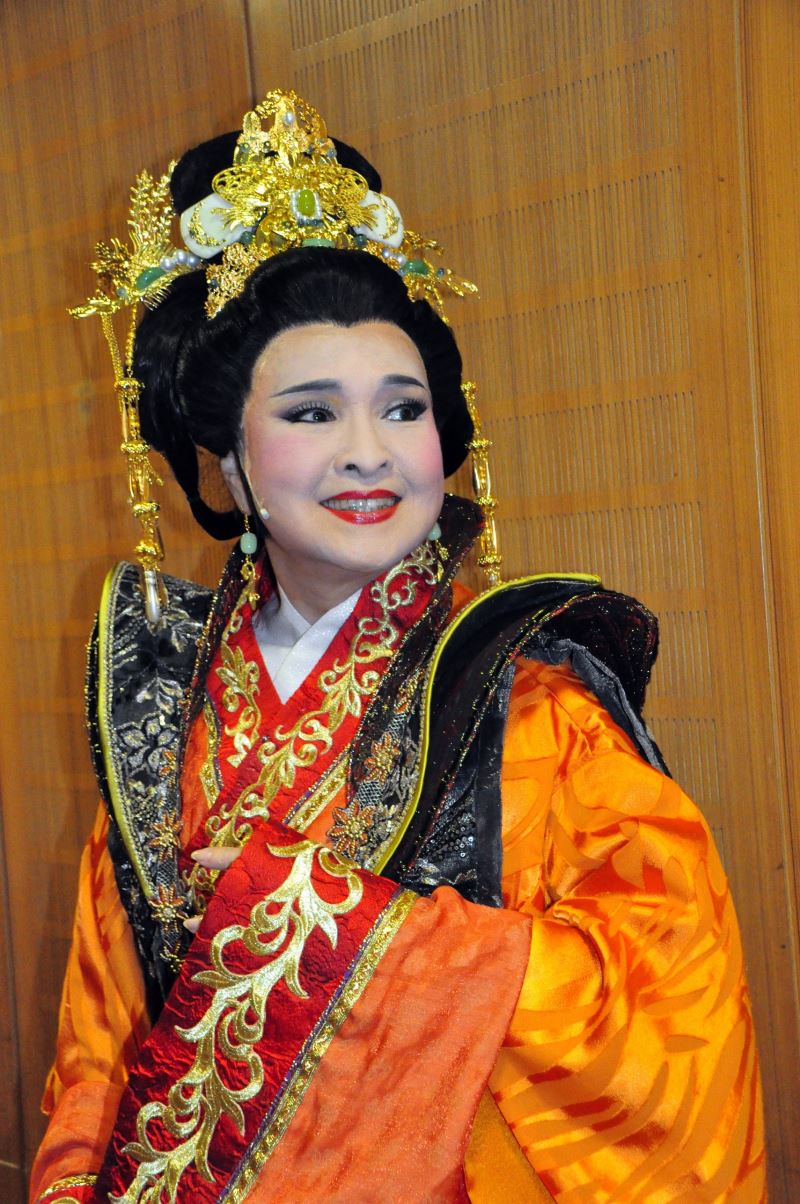 Chinese Name: 王仁心
Date of Birth: 1946
Place of Birth: Changhua, Taiwan
Did You Know?
Wang Ren-hsin is an iconic veteran portrayer of dan (female) roles in Taiwanese opera, also known as koa-a-hi. She has contributed greatly to the art of koa-a-hi for over six decades and has been a witness to the development of the art form. Her "Sì-Kù-Liân Songbook," which preserves a number of operas, has been of great value to the preservation of the art and of the sì-kù-liân (four lines rhymes) performance style. In 2020, she was named by the Ministry of Culture as a preserver of the important traditional performing art of koa-a-hi, joining the ranks of Taiwan’s National Living Treasures.

Wang Ren-hsin, who goes by the stage name Wang Jin-ying, was born in Xiushui Township, Changhua. While she did not come from a Taiwanese opera family, she nonetheless spent her childhood in a theatre troupe. Not only did her mother love to watch shows, but her sister, Wang Jin-lian, also studied children’s theater with the troupe. At that time, the failure of her father's business sent the family into dire financial straits to the point that even staying fed and clothed became a problem, and so Wang would take the whole family to the troupe during mealtimes. Wang watched the actors rehearse, read their lines, and practice singing every day, slowly but surely learning and practicing a number of shows. At the age of six, she began to take part in performances by the troupe, starting by performing the role of "Old Lady" in place of an absent actor.

Despite showing talent as an actor at an early age, Wang also found herself facing the problem of having no shows to perform in, and so she and her older sister looked for alternatives, joining a troupe of traveling medicine salespeople and performing with them. By working on shows with this troupe, part of a Taiwanese tradition of using public performances to draw crowds and hawk medicines, Wang was able to hone her singing, enunciation, and ability to think on her feet while performing. After three years, Wang’s singing skills had become much stronger, and then she joined Chiayi Public Radio as a member of the "Five Tigers Radio Troupe (五虎廣播劇團)." At the age of 17, she tested into Taichung Mintian Radio for her excellent voice. Her nickname, "Little Kitten," began to ring out across Taiwan, and with her successive recordings of "Qin Xianglian (秦香蓮)," "Three Scholars (三進士)," "Su-san On Trial (玉堂春)," and "Hongluanxi (鴻鑾禧)," these boosted her popularity and she soon had a fanbase spread across Taiwan and Southeast Asia.

Five years later, at 22, she moved to Liantong Radio, joining with her sister under the banner of Liu Zhong-yuan (劉鍾元). Later, she made the move to televised koa-a-hi with China Television, changing her stage name to Wang Jin-ying. Several works that year, such as "The Butterfly Lovers (梁山伯與祝英台)," "The Lady Liu Yan (柳燕娘)," and "Romance of the West Chamber (西廂記)," received excellent ratings, and Wang became known as part of the "Iron Triangle Troupe" along with Chen Cong-ming (陳聰明) and Liu Qing (柳青). At the same time, she also sang eight hours of songs on Minben Radio and Zhengsheng Radio every day. In 1985, Liu Zhongyuan established the Holo Taiwanese Opera Troupe, with Wang joining them as artistic director. In 2020, to focus on koa-a-hi scripts and the teaching of student artists, she will step down from her long-held role with the troupe. Currently, she serves as director of Banlamgu Culture Co., Ltd., and as the honorary chair of the Wang Jin-ying Traditional Culture and Art Association of the ROC.

Wang has preserved and studied a large number of koa-a-hi operas. Different characters have their own unique style of narration, which is an essential part of personifying their characteristics and charm. As soon as they appear on the stage, the audience is able to latch onto their exact role and focus their attention on them. Her voice is sweet and mellow, and the characters she portrays are consistently vibrant and vivid. She has also spared no effort in teaching the art to ensure it continues to be passed on to later generations, including through teaching the Department of Taiwanese Opera at the National Taiwan College of Performing Arts and by taking up invitations to give lectures promoting the art of koa-a-hi around Taiwan.

Wang Ren-hsin’s career has seen her experience the full array of koa-a-hi performance types, from indoor stages to outdoor medicine shows, from radio to television to the theatre. In 1991, she also began taking part in the performance of contemporary theatrical shows. Among her most iconic works are "The Repentance of Liang Huangbao (梁皇寶懺)," "Qiu Feng Ci (秋風辭)," "Taiwan, My Mother (臺灣我的母親)," "Swan Banquet (天鵝宴)," and “Qu Pan Ji (曲判記)." She has won the 2nd Taipei Culture Award (1998), the 8th Global Chinese Culture & Arts Award (2000), and the 5th Taipei Master of Traditional Arts Awards (2014), and was designated by the Ministry of Culture as a preserver of the important traditional performing art of koa-a-hi in 2020, joining the ranks of Taiwan's National Living Treasures.