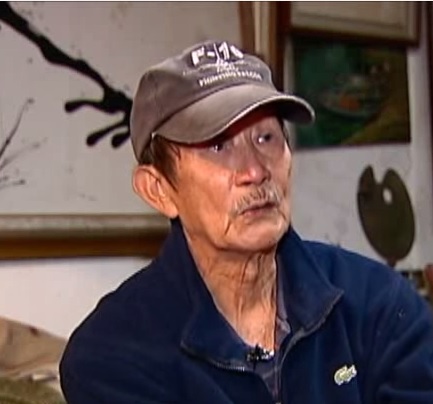 There are artists who are never content with existing materials, and Chiu Hsi-hsun is one of them. He uses asphalt to paint, establishing a personal style that is both unique and celebrated.

A former satirical cartoonist, Chiu and his social and political commentary did not escape the notice of authorities. He received intimidating feedback that prevented him from finishing a comic book series he was working on, and was detained for a cartoon that featured talking dogs.

After hearing that the military executed a purportedly unruly cartoonist, Chiu decided to shift direction and focused on painting. However, he was not satisfied with the existing materials.

It was in 1979 when he discovered asphalt. It was a time when he felt depressed about his work, and decided to clear his head by taking a walk. When he saw construction workers paving the road with tar, he thought, "why not?”

He started experimenting with the dark and highly viscous material, a residue from petroleum distillation. He added a stabilizing chemical and some plastic material before realizing that hot-melted glue controlled asphalt fluidity. It was a trial-and-error process that took four years.

Instead of a brush, Chiu paints with a spoon and scraper. He uses the spoon to splash boiling asphalt on the canvas, and the scraper to produce shapes. Everything needs to be done in certain amount of time before the asphalt hardens.

Most people think asphalt is black, but actually it is dark brown. The artist explained that he can whiten it by adding a type of German-made industrial flour to bleach, and add more colored powders for color.

His experimentation with asphalt proved controversial. Traditional artists took his creativity as a cheap trick, and his first asphalt painting exhibition was slammed by local critics. Under pressure in Taiwan, Chiu flew to New York only to find out that his creations were well-received by Western art lovers.

He did a painting of former U.S. President Bill Clinton playing golf, and another of the Pope John Paul II in prayer. The former is part of Clinton's personal art collection, while the latter is displayed at the Vatican City.

One of the reoccurring themes in Chiu's pieces is Bodhidharma (達摩), who is credited as the transmitter of Zen. Using the same subject to chart his progress, Chiu practices different techniques for depicting Bodhidharma, whether it's a sheet of asphalt for beard, or threads for eyebrows.

Social or political satire is another lasting theme in Chiu's works, be it a comic piece or large asphalt paintings. One of his popular paintings shows a group of frog-looking figures snatching at New Taiwan Dollar bills.

To illustrate people's greed for wealth, one of his paintings shows women fighting for jewelry, while another shows a group of old men reaching for Viagra. One interesting anecdote about this painting is that the Viagra went missing during one exhibition and Chiu had to make another one made of glass to replace the real pill.

Painting out of the box

Noting how for thousands of years paintings have been limited inside a frame, Chiu purposefully paints over the picture frame. For example, in one painting the frog-like figures latch onto the frame with their hands and feet.

By removing the usual boundaries of visual art, Chiu maximizes the potential of asphalt as an art medium, especially its fluidity and its thickness. Asphalt can be layered so that up to ten layers could still be distinguished clearly, unlike Chinese ink, oil paints, or other materials of the same color and saturation.

Creativity is the most precious part of any art form. Now in his 70s, Chiu is still painting with a critical eye and a dry sense of humor. He works in his studio in Jiufen District (九份) during most weekdays and welcomes visitors into his world.