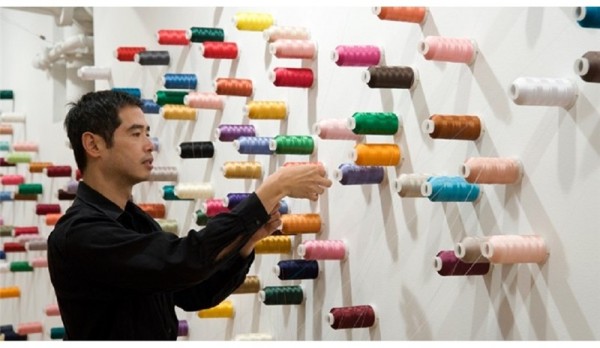 Lee Mingwei is an acclaimed artist best known for the relational aesthetics in his art. Seeking to explore human connections and the interactions between individuals and society, Lee's participatory artworks have been recognized internationally and featured at exhibitions worldwide.

Born into a family of doctors, Lee went to the U.S. to study biology per parental expectations after finishing high school in Taiwan. However, Lee soon realized that a career as a doctor was not what he wanted, and decided to focus on textile arts at the California College of Arts in 1993 and study for a MFA in Sculpture at Yale University in 1995.

Lee debuted with his first solo exhibition "The Dining Project” at the Whitney Museum of American Art in 1997. Taking inspiration from his personal experience of meeting new people by inviting strangers to dine together in his first year at Yale, the exhibition invites one interested party at a time and uses meals as a medium for trust and intimacy while conversing with the host, Lee.

The positive feedback of the exhibition earned him the opportunity to create another project for the same museum - "The Letter Writing Project.” This project invited viewers to write letters they had meant to pen but never had the time to complete for absent friends, family members, or loved ones. The letters were then either sealed, posted by the museum, or opened for visitors to read.

Through allowing visitors to read the personal letters of others, the exhibition evoked the unexpressed feelings that all viewers carried and would feel relieved to write down, thereby creating a chain of feelings that strangers came together to share.

As a practitioner of participatory art and relational art, Lee went on to create several projects that invited museum-goers to participate and become part of the exhibition by exploring the commonly held values and the human connection through different mediums.

"The Moving Garden,” for example, is an acclaimed project that creates new and unexpected experiences in an urban city. The project, which was first held at the 2009 Lyon Biennial, invites visitors to take one of the fresh flowers offered by the exhibition, take a detour when leaving the museum, and give the flower to a stranger.

Another highly participatory artwork titled "The Moving Garden” is similar to his other projects by helping people reconnect with themselves, their emotions, and memories. Lee uses art to emulate daily life and motivate people to reexamine their behavior and core values through art and human interaction.