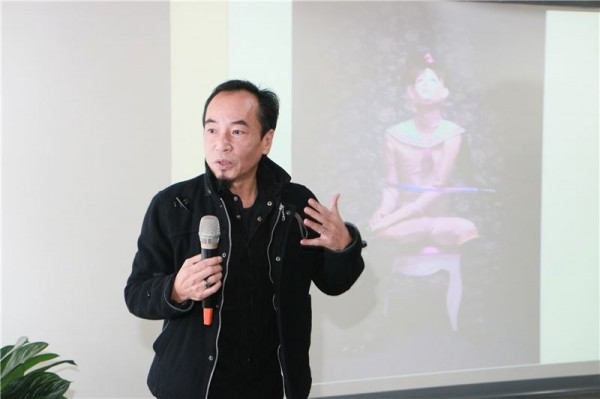 Born in an era of geo-political turbulence, Wu Tien-chang is a chameleon-like artist who reexamines the history of regime transitions in Taiwan through paintings, photography, and digital arts. Over the past three decades, Wu has challenged himself by using different mediums to create new artworks, developing a unique aesthetic style that embodies the grassroots elements of Taiwan.

Growing up in the 1950s, Wu experienced political shifts such as the Kuomintang's regime, the Cold War, and the democratic reforms in Taiwan. Therefore, most of Wu's works explore the theme of politics, history, and the society of Taiwan.

Since 1980, Wu has combined history with different media to interpret and reflect the local political development in a cynical and humorous way. His creative journey is marked by four distinct phases.

From 1982 to 1991, Wu focused on criticizing and mocking society and politics, reinterpreting the political figures of Taiwan and mainland China through the medium of oil paintings.

From 1993 to 1998, Wu explored history and emotions by combining photography with commonly tacky items like plastic flowers, diamonds, and metallic fabric to create a series of works that expressed the atmosphere and sentiments of westernization in post-war Taiwan.

Since 2000, Wu tried his hand in digital art to explore Taiwan's mixed culture and identity, applying techniques of graphic editing and computer-generated imagery to create astonishing and thought-evoking images of costumed models through staged photography.

In 2015, Wu represented Taiwan at the 56th Venice Biennale, presenting a series of interactive video projections and installations titled "Never Say Goodbye” to explore the lives of those living at the bottom tier of society as well as the westernization of post-war Taiwan through performances by human figures in artificial skin membrane costumes.

Wu's works have also been showcased in art festivals and exhibitions based in Taiwan and China, Hong Kong, Japan, Czech Republic, France, and the United States.

Every ten years, Wu changes his style of creation to better reflect the changes in Taiwan and to commemorate the collective pains of the Taiwanese people. Wu once stated: "I consider myself as an artist. If I've done one kind of art form, I won't do it again as I am not willing to repeat the same creation.”