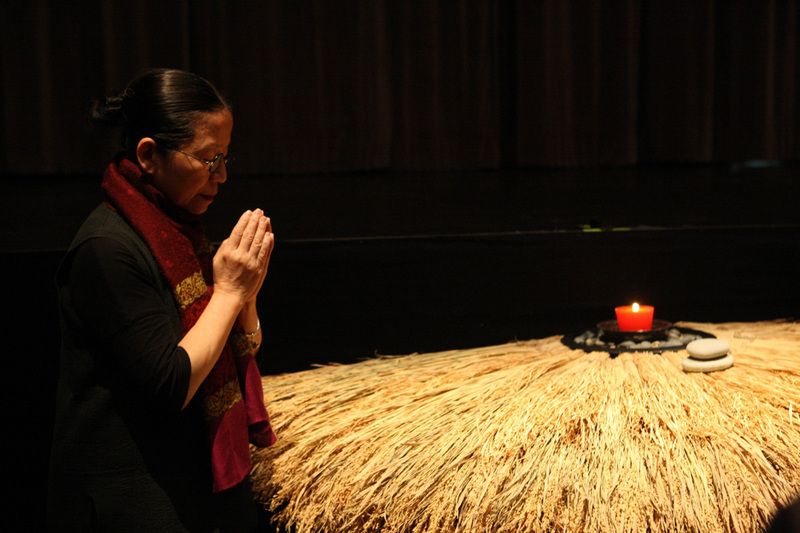 Lin Lee-chen is the founder and artistic director of Legend Lin Dance Theatre (無垢舞蹈劇場). She won the National Award for Arts in 2005 for accentuating the Taiwanese spirit through her performances, and received the 2015 Taipei Cultural Award in recognition of her contribution to Taiwan's performing arts.

When Lin was in high school, she had started to choreograph for her peers and won many school dance competitions. She was once given a ticket to a Paul Taylor Dance Company show in Taipei, which was her first professional dance theater experience. The mind-blowing performance cemented Lin's determination to pursue her dream of choreographing.

After studying dance at the Chinese Culture University, Lin served as a high school dance teacher. Within five years, Lin completed five large-scale dance pieces involving hundreds of people, and each had won 1st place in a national competition. Lin believed that anyone can become a dancer and hopes to instill that belief in her young dancers.

In 1978, Lin had her first dance solo choreography - "Don't Forget Your Umbrella (不要忘記你的雨傘).” The debut received wide acclaim in Taiwan and she was praised as "a genius choreographer in Taiwan's dance scene.” In the following years, Lin continued to create diverse works in terms of themes, stories, and presentation.

From 1982 to 1989, Lin temporarily left the dance industry to embark on a journey of self-discovery. Lin visited Taiwan's aboriginal tribes to understand their traditional rituals. The vibrant life she experienced during the gap years helped her to understand her own body and develop new aesthetics. It also prompted her to establish the Legend Lin Dance Theatre in 1995.

Lin and Legend Lin Dance Theatre brought Taiwanese dance to the international scene, including the stages of France, Spain, Italy, Germany, the U.S. and Mexico. With productions such as "Anthem to the Fading Flowers (花神祭)” and "Miroirs de Vie (醮),” Lin expresses her love and respect for the motherland through choreography that fused eastern aesthetics with Taiwanese cultural context.

Lin once stated: "Some people think it takes only talent and skill to create; but all I need is time to allow me to experience life.” Inspired by Taiwanese traditions, Lin has created a unique style and brand of aesthetics that represent her personal life as well as the vibrancy of Taiwan.