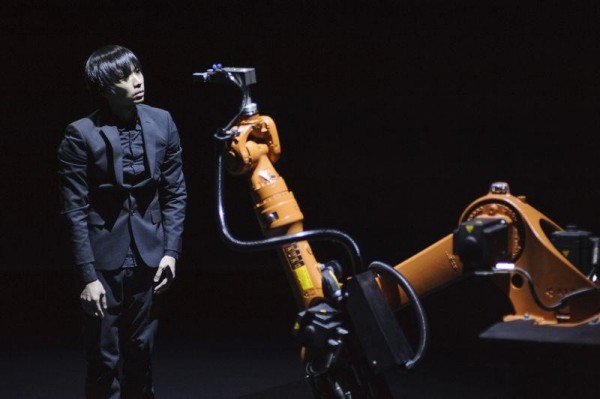 Apart from being a well-established dancer and choreographer, Huang Yi is also a self-taught composer, web designer, and photographer who has choreographed a handful of productions for Cloud Gate 2. Huang established his own studio in 2010 and his innovative digital performances that involve mechanical elements have made him one of the "25 to Watch” list compiled by Dance Magazine in 2011.

Huang's childhood experiences play an important role in his professional development. He was immersed in the arts from watching his parents teach ballroom dancing at their studio, and learned to paint with his father at an early age.

However, a dramatic downturn in the family's financial situation soon forced Huang to become a perfect child to meet strict parental expectations. Having had his personality shaped to become as obedient, friendly, and considerate as a robot, Huang has longed for a robot friend since childhood and professed that he developed an emotional attachment to computers.

After graduating from the School of Dance at Taipei National University of the Arts, Huang became a prolific choreographer whose productions received international acclaim, including the second prize at the Cross Connection Ballet International Choreography Competition in Copenhagen in 2011.

Huang began to explore the relationship between mankind and technology as early as 2006. He integrated his personal experiences in dance, photography, video, music, and fine arts to produce "SPIN 2010,” and collaborated with sound artist Wang Chung-kun (王仲堃) to create an interdisciplinary mechanical performance titled "Symphony Project - I. Violin (交響樂計畫-壹.機械提琴).”

In 2012, Huang created the groundbreaking digital performance "Huang Yi & KUKA (黃翊與庫卡),” taking inspiration from his childhood to examine the relationship between human and robotic beings by incorporating dance and mechanical engineering.

Using a mechanical arm Huang programmed as a mirror of his own longing, the duet performance of Huang and KUKA the robot explores the role and the meaning of artificial intelligence in a human world. Each interaction between Huang and his robot is programmed and refined by the choreographer himself.

The production was chosen to open the Austria-based Ars Electronica Festival in 2013, and went on to be selected by the International Society for the Performing Arts in New York as one of the most anticipated performances of 2015.

"Dancing face to face with a robot is like looking at my own face in a mirror … I think I have found the key to spin human emotions into robots,” Huang once said. Huang's innovative works not only reflect his childhood but also modern human society, where technology is deeply immersed in all aspects of everyday life.