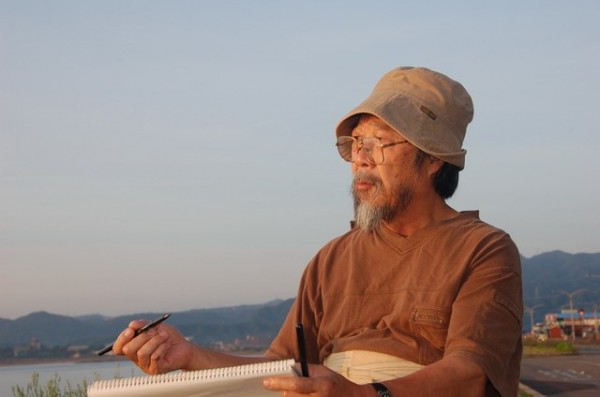 Lee Tsai-chien, one of the leading forces in contemporary sculpture in Taiwan, has been entwined with the arts all his life. As the saying goes, he was born into a literary and artistic family with a calligraphy brush in his hand. His grandfather Lee Hsia (李霞) and father Lee Bi (李璧) were both accomplished calligraphers, and the young Lee mastered the art of Chinese strokes during childhood.

Lee crossed the Taiwan Strait in 1949, enrolling in the Department of Art at the National Taiwan Teachers University. His arrival came at a sensitive time in Taiwan's history when politics colored almost every aspect of daily life. Lee was a mainlander and a student, full of vitality and brimming with ideas — some of which were at odds with the official line of the time.

After a political fallout and being dropped by NTTU, Lee landed a design job in 1957 with the Taiwan Handicrafts Promotion Center (台灣手工業推廣中心), which enabled him to both travel and explore new art forms for over a decade.

Art from a different angle

Lee produced "Finite and Infinite (低限的無限)," a hefty sculpture of angular red-enameled stainless steel, for the opening of the Taipei Fine Arts Museum in 1983. Museum visitors discovered that from a certain angle the work looked like a tabooed red star, leading to misinterpretations of what it was about. Politically it was not a good time to be producing art works that suggested the wrong political ideology, and one un-amused veteran soldier voiced his dissatisfaction to museum officials.

On Aug. 16, 1985, the sculpture was repainted silver on orders from museum director Su Rui-ping (蘇瑞屏), who hoped that a more neutral color would quell the rumblings. Instead, the repainting job stirred up even stronger public outrage and a storm of protests from Lee, and the controversy simmered for more than a year until the work was finally restored to its original red vibrancy on Sept. 4, 1986.

Lee has lived for more than two decades in Jinshan (金山), an area which ranges from 1,000-meter high mountains down to the northern coastline of the island. The mountains and sea here are captivating, and in summer Lee can often be found walking barefoot along the seashore at dawn as the sun breaks over the horizon. The cloud-filled sky, the changing shadows of the mountains, and the sea with its undulating waves and fishing boats all serve as inspiration.

His former students are frequent visitors, and he continues to design and produce his trademark geometric works as well as many other smaller and often whimsical figures. A handful of his large pieces sit on the large expanse of land surrounding his house and studio. Inside the house are paintings, sketches, books about art, and lots of sculptures. Some of the items were made by friends and students, some by Lee himself, and some brought from afar. He has a story about each piece and loves to talk at length about them.

Lee's Buddhist beliefs give him a broad and passionate outlook on life, which has manifested itself not only in his earlier sculptural works, but also in more recent efforts to improve the culture of the Jinshan area. For example, whenever the local community classroom holds an event related to sculpture, Lee is always an enthusiastic participant. When junior and high school students visit, he always sets aside time to talk with them and help train their concepts of art.

For Lee, sculpture meant highly abstract works involving twisting geometric shapes. Many of his works begin with a simple classic Chinese concept that took on Western aesthetics. Lee worked mostly in sandstone during the 1950s, and tended towards quartzite in the 1960s. Circles and ovals shapes figured prominently in most of his early works, after which he embraced sculptural minimalism, producing large pieces with geometrical shapes and profundity.