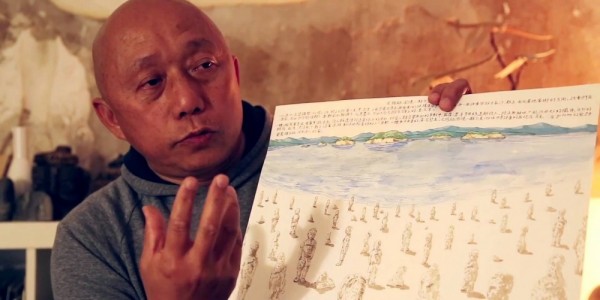 Lin Shuen-long is a Taiwanese installation artist whose artworks have appeared in several prominent public art festivals in Japan. His large-scale creations serve to connect people with their land and boost the public's awareness of environmental and demographic issues.

After graduating with a bachelor's degree in fine arts from Nihon University, Lin pursued a master's degree in mural painting from the University of Tokyo. In 1991, Lin attended École nationale supérieure des Beaux-Arts in Paris and resided in France as an artist until 1996.

In 2009, Lin was invited to join the Echigo-Tsumari Art Triennale, an international art festival launched in 2000 to revitalize the rural Echigo-Tsumari region of Niigata Prefecture in Japan. "Beyond the Border — The Mountain (跨越國境．山)," which consisted of a traditional Taiwanese gate and a water buffalo to embody the Taiwanese spirit, was installed at the venue to convey the idea of crossing the border between countries and people.

In 2012, Lin joined the Echigo-Tsumari Art Triennale with his public art "Tour．Border — Journey of Praying (遶‧境-祈福之旅).” The large-scale figures representing the maternal earth toured the streets to interact with local residents and pray for a better future.

In 2013, Lin set off for Japan again to join the Setouchi Triennale, a contemporary art festival held across dozen of islands in the Seto Inland Sea. With his new theme, "Beyond the Border — The Ocean (跨越國境・海)," Lin created a coastal plant-inspired "Ship of Seed (種子船)” on the beach of Teshima Island. Lin hopes to deliver the idea that the ocean is not what separates communities; instead, it is what connects people together.

Lin believes what makes an artwork important is not the artwork itself, but the artist's motivation and the impact of the artwork upon its viewers. After 3 years, Lin brought his "Ship of Seed" again to the Setouchi Triennale 2016. The driftwood-made ship, which is now renovated with Taiwanese elements, carried Lin's hope to spread Taiwanese culture and raise people's awareness of the environment.