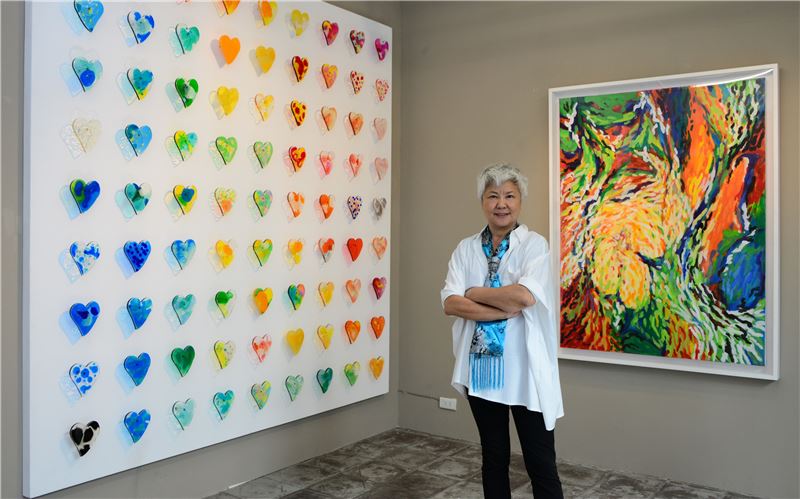 Jun T. Lai is part of an outstanding artistic generation born in Taiwan in the wake of World War II. She has over four decades of experience in the arts, and began dedicating herself to public art in 2000, earning several awards in the years since. As an artist, she has always strived to challenge herself and social constraints, and her works thrum with life and passion.

After graduating with a Bachelor of Arts in Fine Arts from Chinese Culture University in 1974, she traveled to Japan to study modern art, completing a Master of Arts in Graphic Design there and participating in exchange opportunities. Such experiences broadened her artistic horizons and gave her creative capabilities a solid foundation.

Her baptism into modernism came early into her artistic career, and Lai's explorations of different media and forms in this early period ― such as the independence of color, light, and the relations between shape and space ― all bring with them a powerful sense of experimentation.

Later she began making use of natural materials like wood, stone, and sand, while also taking inspiration from Chinese and Zen Buddhism. During this time, she created a series of works built around metaphysical themes concerned with "existence" and "change." Her works in this period were more somber and contemplative.

As public art began to grow in popularity in the early 1990s, Lai started applying her past studies of materials and thoughts on existence to public art projects of her own. Building on local, cultural, and historic characteristics, her works injected life and energy into public infrastructure and gave Taiwan a new, splendid face.

Her creative history reveals an artist who draws together Western modernism, Eastern philosophy, and the social practice of public art. During her decades-long creative career, she has been a powerful demonstration of how a female artist can both show warmth for her homeland, but also reveal artistically profound, alternative interpretations.

She once stated that freedom in life is her ultimate credo. "Life" here means not just living pleasurably, but attempting, through art, to slip out from the bonds of society, liberate consciousness, and enjoy the experience of being truly free.