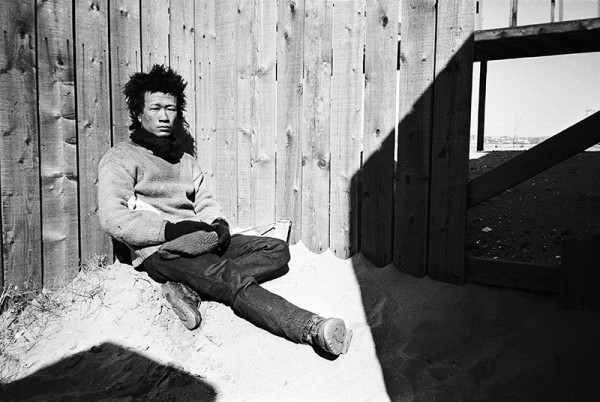 Tehching Hsieh is an unusually uncompromising artist. He is famous not for painting, sculpture, or photography, but for his performance art, which has seen him break both his ankles and perform arduous, year-long feats, demonstrating a rare devotion to his work. Since then, he has declared that he is no longer an artist, but his work remains an inspiration to others.

Hsieh was born in Pingtung in 1950, and dropped out of school aged 16 to paint. After finishing his military service in 1973, he gave his first solo exhibition at the American News Bureau, but shortly afterwards he stopped painting. Instead, he turned to performance art, creating a piece called "Jump" in which he broke both his ankles. Then he found a job working on a boat and, in 1974, jumped ship near Philadelphia in the USA. He began working as a cleaner and dishwasher, and would remain an illegal immigrant for the next fourteen years.

In 1978, he made the first of his five "One Year Performances" called "Cage Piece." Like the other pieces, it lasted for an entire year, from September 1978 to September 1979. For this duration, he locked himself in a wooden cage a few meters across, and did not talk, listen to the radio or TV, read, or write. The performance was open to the public on certain days, and a lawyer made sure he remained within the cage.

For 1980-81's "Time Clock Piece," Hsieh shaved his head, then punched into a time clock every hour on the hour, every day, and took a picture of himself. The thousands of photographs of his changing body make a six-minute-long movie. 1981-82's "Outdoor Piece" involved Hsieh spending an entire year outside, without entering buildings or vehicles, and in 1983-4's "Rope Piece," Hsieh and fellow artist Linda Montano spent a year tied to each other by a short rope, without being allowed to touch.

These pieces brought Hsieh fame as a radical artist, which he did away with his next pieces. In 1985-6, Hsieh performed "No Art Piece," in which he did not create, talk about, look at, or read about art, and did not enter a gallery. Finally, from Dec. 31, 1986 to Dec. 31, 1999, he carried out his "Thirteen Year Plan," in which he made art secretly, without allowing himself to exhibit it. Shortly after this concluded, Hsieh declared that he was no longer an artist.

Since then, Hsieh has organised exhibitions of his work around the world and published a book including documentation of his art, essays about it, and an interview. The Museum of Modern Art and Guggenheim Museums in New York have both displayed his work.

Moreover, an exhibition of Hsieh's work titled "Doing Time" was part of Taiwan's pavilion at the 2017 Venice Bienniale. This included evidence of the "Time Clock Piece" and "Outdoor Piece," as well as early photographs and performance art from before he moved to America, and a documentary in which Hsieh revisits the sites of his earlier work. He has also displayed art in Asia and South America.

Hsieh's work has been described as concerning human existence and its relationship with time, nature, and control; or about the way in which art and life are connected. Hsieh himself describes it as being about "wasting time and freethinking." His uncompromising legacy and an amazingly original body of work have deeply affected other performance artists.