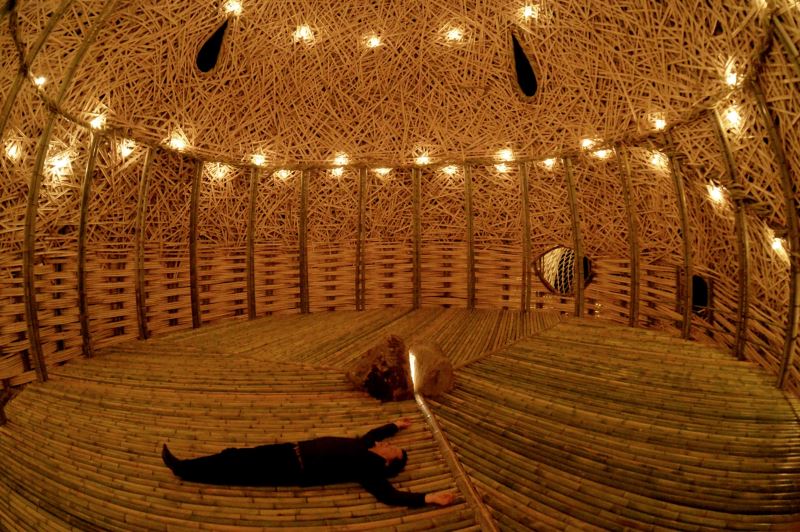 Wang Wen-chih was decidedly talented at painting from a very young age and wanted to pursue the dream of becoming an artist one day. However, it was not an easy goal to reach, given the relative lack of information and resources needed for advancing his skills while growing up in the rural Meishan Township of Chiayi County.

As a result, he followed a very typical schooling route in Taiwan, and enrolled in a senior vocational high school to study chemical engineering. After graduating, he kept feeling frustrated no matter what job he held. So he decided to follow his passion and worked hard to prepare himself for the entrance examinations of universities that provided art programs. After several attempts, he finally passed the examination of Chinese Culture University (CCU) at the age of 27.

After graduating from CCU, he then studied in Paris for four years before returning to Taiwan, where he ran into a creative block and was unable to produce any work for three straight years. He became aware that he found no inspiration in the buzzing capital city of Taipei, and chose to return home to Chiayi to become more in tune with the land of Taiwan.

This was when Wang chose bamboo as the primary material for his art. At that time, his works simply looked like enlarged versions of any traditional woven pieces. Slowly, he began trying to craft pieces that conveyed a majestic sense of space, drawing upon the idea of creating a spatial platform for freeing up one's spirit and encountering new people and experiences.

One of the core principles that his creations are founded on is the community aspect of group creation. It ties back to his childhood experience of growing up in the forests of Chiayi and harvesting wood with his brothers. It harks back to the communal lifestyle that once characterized the people of Taiwan in earlier, simpler days.

When Wang travels abroad, he usually selects natural materials like bamboo and rattan to weave his massive installations. These works are usually constructed with a passage that leads to an inner sanctuary where one can rest at ease. Wang compares the interior of his installations to a pristine forest where one's heart beats slow and clear.

In the summer of 2017, Wang had some 7,500 stalks of bamboo transported from his hometown Meishan to the Taipei Fine Arts Museum for a project dubbed "Shelter (庇護所)." He spent three months weaving two works — a huge dome representing a spiritual shelter and a nest-like piece woven from donated articles of clothing. Inside this "nest," visitors could look up and peer into the outside world through a hole at top of the structure.

Beginning in 2010, Wang created installation artworks named "House of Shodoshima (小豆島之家)," "The Light of Shodoshima (小豆島之光)," and "Dream of Olive (橄欖之夢)," respectively for the 2010, 2013, and 2016 editions of the Setouchi Triennale in Japan. Wang invited people from different villages on Shōdo Island to build these works together, evoking affection that transcended cultural barriers while helping the triennial festival rejuvenate the islet's lukewarm economy.

This year, Wang was once again invited as artist-in-residence at Shōdo during the 2019 Setouchi Triennale with his work — "Love in Shodoshima (小豆島之戀)," which was co-produced by Shōdo islanders, volunteers from Chiayi in southern Taiwan, and Australian bamboo arts studio Cave Urban. Although his woven artworks are dismantled after a period of time, Wang feels that the memories of these fleeting works are more significant than maintaining their existences for perpetuity.