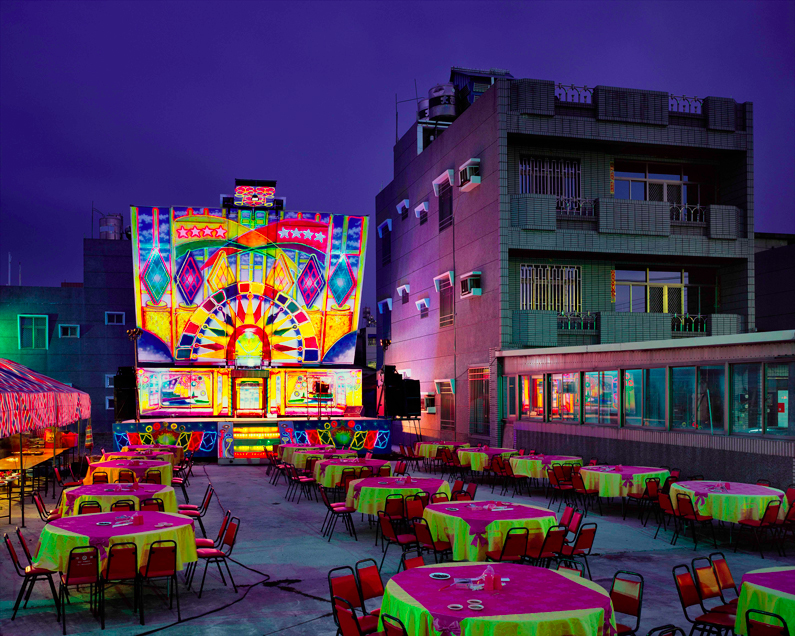 At the start, Shen Chao-liang thought of documenting traditional Taiwanese vaudeville culture with monochrome photos to portray this unique custom. But soon he found that only color photos could convey the festive atmosphere surrounding stage trucks — the mobile platforms on which vaudeville performances are presented.

Shen points out that most news coverage about stage trucks has been excessively negative and associated with sex and vulgar culture. "Was it possible that we were just over exaggerating one side [of the argument] to negate the whole stage truck culture? Might not there be something about this [sub-culture] that contains human and intimate, real-life issues that we should care more about?" asked Shen, who began photographing the mobile stages with color in 2005.

These so-called "stage trucks" are shipping-container trucks that use hydraulic power to unfold their modified containers into modern-look stages decorated with swanky and vivid hues. They show up at both joyful and grievous gatherings with vaudeville troupes.

Shen also takes pictures of the troupe performers mainly to portray their lesser-known sides and fight perceived stereotypes of vaudeville troupes. To accomplish this goal, he chose the portrait form for this line of work so he could keep his camera lenses from being filtered by emotions.

Shen, with his master’s degree from the Graduate School of Applied Media Arts at National Taiwan University of Arts, is known for his detail-oriented and intricate approach to documentary photography. His creations are usually presentations of hyper reality and the reflection of his social observations.

The latter three photography collections are respectively dedicated to colorful stage trucks, monochrome photos of performers, and the roaming work and lives of performance groups, which altogether spell out the three major parts of Taiwanese vaudeville culture.

Shen's photographs have toured exhibitions, festivals, and museums in 16 nations, including the United States, Canada, and France. A significant portion of his works are collected and displayed by the National Taiwan Museum of Fine Arts, South Korea's Dong Gang Museum of Photography, and Japan's Sagamihara City Government.

Recent works by the former photojournalist mainly focus on social landscapes and the circumstances of human lives, with the scope and details of each themed set coming into focus with the aggregation of photographs. He is currently working as a freelance photographer, photography critic, and a part-time assistant university professor.