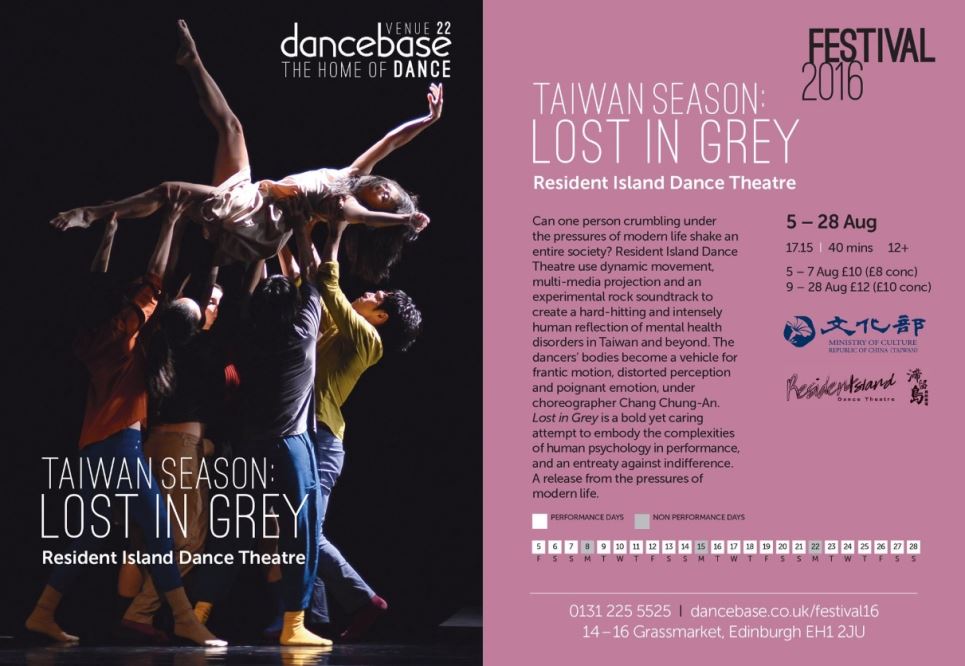 At the young age of 18, Chang Chung-an (張忠安) began to lose vision in his right eye due to an illness, resulting in Chang leaving his dance training in Taipei and returning to his hometown in Pingtung. Chang's life was in disarray, but he still believed that dancing was a tool he could use to express his thoughts and beliefs. His childhood teacher Mrs. Huang encouraged and helped him return to the dance world, and starting from scratch, Chang trained, taught, and choreographed again.

Then in 2010, Chang established the Resident Island Dance Theatre (RIDT, 滯留島舞蹈劇場). All the dancers in the troupe are born in southern Taiwan and work or go to school in southern Taiwan. They take time out of their busy schedules every week, sacrificing their weekends for practice to put on superb dance performances.

Due to his experiences, Chang felt he was aware of the different ways in which other people in society looked at and treated those with physical or mental disabilities. So he began choreographing dances about social issues and society's marginalization of certain groups. He aims to raise awareness of these problems and the anti-social conditions caused by a society full of stress.

After comprehensive field research, Chang created the "Lost in Grey (時代下的灰斑)" performance for Resident Island Dance Theatre using multimedia projections, an experimental rock soundtrack, and dynamic movements to create an intensely human reflection of mental health disorders in Taiwan and the wider world. The characters in the piece are a mix of many people's real-life experiences and thoughts.

"Lost in Grey" features six performers, with one acting as the patient and the other five each representing a state of mind or emotion that the patient must go through: "Innocence" and happiness of youth before being overcome with the pressures of adulthood, "Calm," "Ruthless," "Antisocial," and lastly "Recovering" but still lacking control.

The dancers' bodies display a range of frantic motions, distorted perceptions, and poignant emotions, presenting the conflict, clarity between the different mental states, and incorporation of the patient's numerous personalities. Ending with the "Calm" persona stabilizing the other emotions and the patient, the piece is highly energetic, inspiring audiences to understand that patients with mental disorders can appear completely ordinary and mental illness could be anywhere and affect anyone.

At the 2016 Edinburgh Festival Fringe, an audience member told RIDT that the piece was an accurate portrayal of mental illness and offered encouragement that it was possible to face such problems and recover.

"Lost in Grey" is a bold attempt to convey the complexities of human psychology in a single performance and a caution against indifference towards an important but invisible issue in society. Chang and RIDT will continue to produce new performances to raise awareness for depression, mental illness, and related issues through dance.