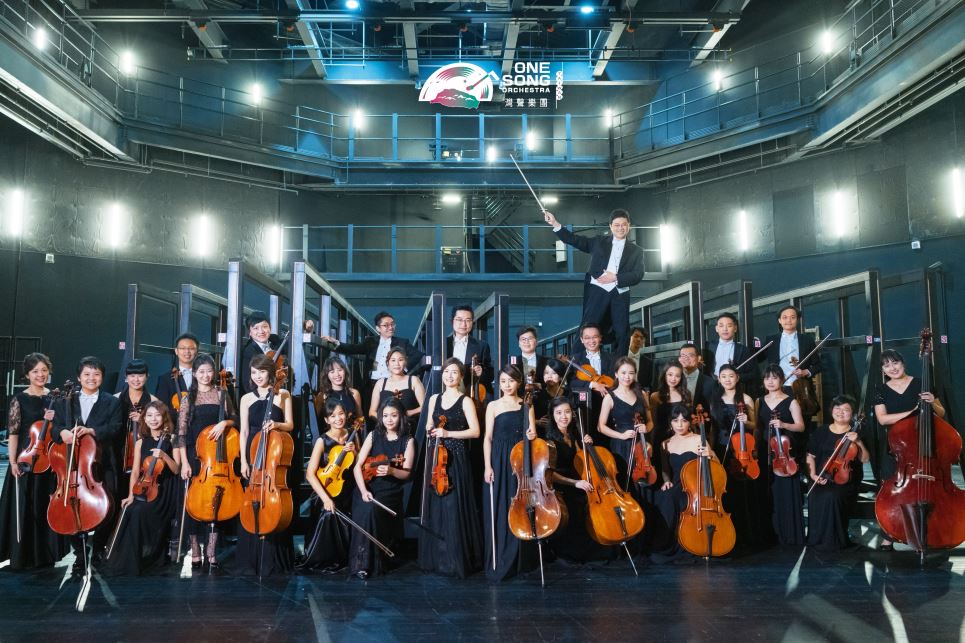 In February 2017, an orchestra dedicated to performing Taiwanese music emerged on the Taiwanese music scene. One Song Orchestra (灣聲樂團) was the product of entrepreneur Lei Hui (雷輝) and founded by Lee Che-yi (李哲藝), a member of Taiwan's "new generation" of composers who currently serves as the orchestra's music director.

Lee Che-yi is a multitalented musical creator who has shown tremendous skill in the harp, composition, and even conducting. His compositions feature elements of Taiwan's local flavor, as exemplified by his "Matsu Piano Concerto (馬祖鋼琴協奏曲)" and "Four Seasons in the Peach Garden (桃園四季)." Over the years, Lee has performed in a number of international music and art festivals in dozens of countries all around the world, including serving as orchestral arranger and music producer for the big Valentine's Day outdoor concert "Eternal Lover (永遠的情人)" and creating the music for the Dadaocheng Puppet Theater's "The Mouse Marries Off His Daughter (老鼠娶親)." In 2004, he created the music for the Mi Fuego Flamenco's "Map of Taipei—Searching for Pan Jinlian (台北地圖之尋找潘金蓮)," as well as being part of the closing performance of "A Pilgrimage (朝聖之行)" for the Macao City Fringe Festival that year. He has won a number of awards over the years, including the Best Composer and Best Creator awards in the Golden Melody Awards for Traditional Arts and Music.

Lee Che-yi has a deep sense for the important role that one's own culture plays in the evocativeness of music, and as such, in addition to his 20-plus years of music production, arrangement, and composition. Lee felt that despite having excellent musicians of classical music who are able to win prestigious international awards at competitions, barely any classical orchestras play music that is truly Taiwanese. He later sought to work with other outstanding Taiwanese performers, which led to the establishment of One Song Orchestra.

One Song Orchestra held its first concert on February 18, 2017, and has since become a vital and innovative force in Taiwan's music scene. In 2018, two new members joined, each with some 20-plus years of experience with orchestra administration: current administrative director Ou Tsung-yang (歐聰陽) and executive director Tsai Pei-yi (蔡珮漪). These two brought with them a new atmosphere and an added air of professionalism to the orchestra.

In 2018, the orchestra put on 23 regular, ticketed performances, while including special invitations, annual shows, and twice-yearly charitable activities, they were involved in over 50 performances. Each of their performances sold, on average, some 80%+ of the available tickets. On January 1, 2019, One Song Orchestra held Taiwan's first large-scale outdoor New Year's concert, the 2019 Formosa New Year Concert, at Dahu Park. The three-hour concert was broadcast live on Formosa Television and online, marking the start of another illustrious new chapter in Taiwanese music history while also giving people a chance to see the importance of playing Taiwanese music and making such music the mainstream of stage performances.

Since its founding, support from all walks of life has provided the driving force for the orchestra. In June 2018, they established the One Song Orchestra Fan Club, with music director and conductor Lee Che-yi inviting former chairman and CEO of Asus Stan Shih (施振榮) to serve as its founding chief. In March 2019, Wang Qian (王謙) and Wu Zongbao (吳宗寶) came on board as deputy chiefs, while the remaining nine members are also outstanding figures from the business and philanthropic worlds. Through their support, these people are not only helping One Song Orchestra, they are also selflessly contributing to Taiwan, driving the hope that the beauty and innovation of Taiwanese culture can be heard everywhere.

One Song Orchestra mainly performs two types of music: music written by Taiwanese and music written from Taiwanese sources. The aim of the orchestra is to "Taiwanize" classical music and "classicalize" Taiwanese music. The members of the orchestra are all outstanding young musicians with backgrounds in classical music, and through their performances, they present a music that is rich in emotion and uniquely Taiwanese. They aspire to make Taiwanese music the mission of Taiwan’s young musicians, and to help this music become the mainstream of stage performances in Taiwan.

In response to the idea that "the local is the global," One Song Orchestra has taken the international language of classical music and uses it to translate Taiwanese music and culture to help more people better understand them. They aim to not just get more exposure and recognition for these outstanding works within Taiwan, but also to touch audiences around the globe by sharing the beautiful sounds of Taiwan with them.

Photo courtesy of One Song Orchestra