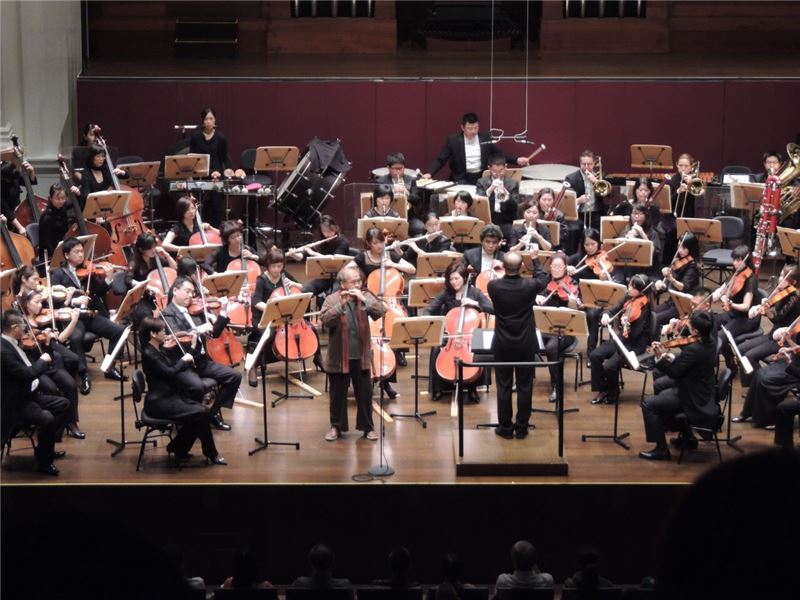 ‧中文名：國立臺灣交響樂團
‧ Established: 1945
‧ Location: Taipei City, Taiwan
‧ Did You Know?
Since 2019, the internationally renowned Chinese-American conductor Lan Shui has once again been invited to serve as the principal guest conductor for the National Taiwan Symphony Orchestra, working together with NTSO Director Liu Suan-yung to promote the orchestra’s mission of "refining technique, innovating tradition, rooting education, and promoting aesthetics," helping classical music become just as much a part of life as air, water, and sunlight. To elevate the musical lives of the people and create social harmony, both “refinement” and “harmoniousness” are important, while a combination of "classical" and "creative" is similarly vital.

The National Taiwan Symphony Orchestra (NTSO) was founded in 1945 and is the oldest symphony orchestra in the country. When it was first established, it was subordinate to the Taiwan Garrison Command, Taiwan Art Establishment Association, Department of Education, and Office of Culture. In July 1999, it was given its current name and put under the auspices of the Council of Cultural Affairs; in May 2012, as the Council of Cultural Affairs officially became the Ministry of Culture, NTSO thus transitioned to be part of the newly inaugurated ministry.

The orchestra’s Wufeng Concert Hall is located in the NTSO Music Culture Park in Wufeng, Taichung, and the structure stands a whopping 64m long and 21m wide, roughly the size of a seven-story building, with an outer wall covered in a collage of ceramic tiles 3.5cm thick, making it the single largest piece of public art in Taiwan by area. Inside, Wufeng Concert Hall is a medium-sized performance venue capable of seating a total of 554 people.

The NTSO Music Culture Park is the only music culture park in Taiwan with a dedicated concert hall, rehearsal rooms, and a musical instrument display area where the public can actually see the instruments used by the orchestra and learn about both the instruments themselves and how they are played through digital technology and audio-visual equipment. In addition, there is also Classic Delight, a hotel in the park providing accommodation in rooms designed with a variety of musical elements which is fully integrated with the facilities of the park.

Although there have been several changes, the orchestra has continued to position itself as a national-level performing group, with the goal of expanding the aesthetic vision of classical music in Taiwan and raising the standard of classical music performance and appreciation in Taiwan, with the expectation of promoting innovation, deepening, and transformation, and then taking the leap onto the international stage to establish the orchestra’s brand.

Since its founding 76 years ago, the NTSO has been led by more than ten directors, with the current director, Liu Suan-yung, a returning head back to continue the job. The orchestra has accumulated a wealth of experience and has invited many international groups and musicians to perform with them. Groups they have performed with include the Berlin Divertimento, Konzertvereinigung Wiener Staatsopernchor, and Singapore Symphony Orchestra. They have also invited artists like conductor Christopher Hogwood, pianist Fou Ts’ong, violinist Hu Nai-yuan, violist Nobuko Imai, and cellist Steven Isserlis to perform with them.

To recruit young wind musicians within Taiwan and to foster their enthusiasm and insight, the NTSO Wind Ensemble was established in June 1993. This new ensemble has created its own model of wind music art with its exquisite arrangements, and with its mission to promote music education, cultural equality, and musical literacy.

In Dec. 2016, the National Taiwan Symphony Orchestra established the NTSO Youth Band, composed of a group of young Taiwanese musicians, to give young people more space to express their talents and more opportunities to share ideas and provide mutual reinforcement, while also building a valuable foundation of human resources for the local music industry. Whether it is cooperating on music education, community concert tours, teaching NTSO winter and summer camps, or assisting with the NTSO seasons, Youth Band members can take part in a variety of activities with the NTSO, starting two-way exchanges and learning from the orchestra and its members, refining their skills, and continuing to shape the culture of the band and the orchestra.