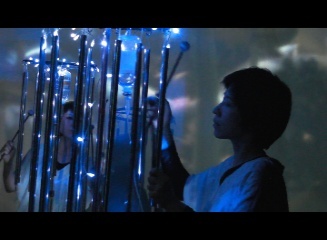 Founded in 2010, Freedom Beat is a unique Taiwanese percussion ensemble group with four members, percussionists Clara Chu, Kate Hsu, Gray Liu and Xero Yeh. The group has developed a completely new fusion of percussion musical style; all of the music tracks which they perform were either composed by the members of the group, or have been customized especially for them.

Percussionist Chu Chun-ying (Clara) was born in 1978, and has studied music since she was six years old. She graduated from the Department of Music Education at the National Taipei Teachers College and received a Master's Degree of Music from the Department Of Music at Taipei National University of the Arts in 2007. While still in school, she participated in many performances in Taiwan with the Cai Xing-guo Opera troupe, Yu-zhi symphony Orchestra and the National Symphony Orchestra. In addition to being a member of Freedom Beat, she also teaches performing arts at the Chong-Yang Elementary School.

Freedom Beat ensemble member Hsu Jui-chun (Kate) was born in 1978. She has studied with famed Taiwanese percussionist Chen Jer-huei, and graduated from National Taipei University of Education in 2000. Hsu is an active freelance performer in Taiwan and has been performing throughout Asia and Europe. She had her debut recital at the National Concert Hall in 2000, and was one of the finalists at the International Percussion Competition in Paris in 2005. Hsu has also participated in many major concerts; she has performed twice with Japan's Keiko Abe, and was invited to perform at the Yonsei University in South Korea in 2013. Most recently, she also collaborated with the Taipei Li-yuan Chinese Opera Troupe on the play "Rigoletto” in Beijing.

Performer Liu Kuan-ping (Gray) was born in 1983. She was a resident percussionist with Ensemble 1002 from 2006 through 2011, and her wide range of musical styles stems from her participations in diverse projects. She was involved in the "Carmina Burana”tour in Italy with the Taiwan National Choir and participated in a joint concert at the Taiwan International Percussion Convention with Bulgarian Percussionist Svet Stoyanov in 2011. Recently, with Freedom Beat, she received the "Best Overall Performance Award” at the 2011 Ishow Performing Arts Competition. She also produced, performed and organized the latest "Fu-Hua”Musical Theater that premiered at the Headspring Festival in Taiwan.

Freedom Beat percussionist Yeh Po-tsen (Xero) was born in 1973 in Hsinchu, Taiwan; he has been a member of Freedom Beat since 2010. Yeh received his Master's Degree from Chinese Culture University in 1997, and then obtained a Diploma in Percussion from premier German music institute Hochschule fürMusik Detmold in 2003. Previously he was a percussionist with various ensembles in Taiwan, including Moving Sound and Taoyuan Symphonic Band.

Freedom Beat is one of five Taiwanese performance groups which participated in the 2013 OFF Festival d'Avignon in France from July 8 to 31, with the assistance of the Taipei Cultural Center in Paris. They joined 4 other groups from Taiwan, as well as more than 1,000 foreign performing arts groups, at the festival. Following their first appearance at the 2012 Festival OFF, where the group performed their work "Fu-Hua” to critical acclaim, Freedom Beat presented a new production for 2013, "Under Ground,” which utilizes various percussion instruments, electronic music, and multimedia imagery in order to create a magical world of percussion-based effects.

An innovative percussion theatre ensemble in the percussion and electronic genre, Freedom Beat combines different types of electronic music, such as pop, rock and roll and psychedelic, in order to bring percussion performance into a new age and provide an absolute feast for the visual and auditory senses.