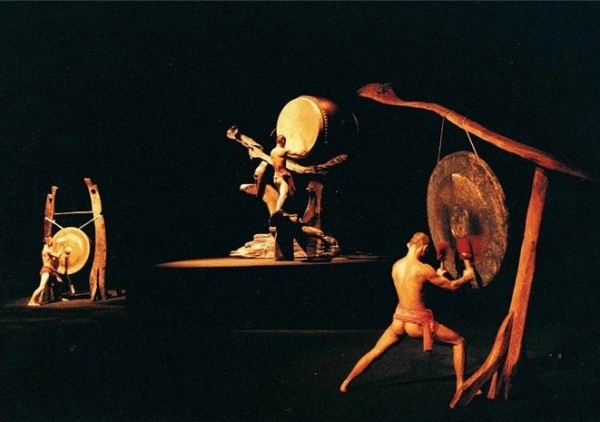 U-Theatre is a unique performance group in Taiwan known for its combination of theater arts and drumming. Its performers, who are given strict training in martial arts, Tai Chi, percussion and meditation, embody the spirit of Tao in their constant search for inner peace and try to convey it to the audience through performances.

Founded by former theater actress Ruoyu Liu, the troupe is based in a half outdoor theater on a hill nearby Taipei. Troupe members are fully exposed to Nature there while staying away from the hustle and bustle of daily life to concentrate on meditation.

Liu, who firstjoined Polish theater director Jerzy Grotowski's workshop after receiving a master's degree in theater arts from New York University, believes that "art is the manifestation of quality of life.”

When Malaysian musician and drummer Chih-chun Huang introduced drumming to the group in 1993, U-Theatre integrated traditional Taiwanese ritual and folk performance arts into theater, creating a style using masks and costumes inspired by Taiwan's hand-puppet show based on Grotowski's training of "objective drama.”

Since 1994, U-Theatre's performances began tofeature drum playing, martial arts, dance and chanting. The spaces where U-Theatre has performed range from traditional theaters, outdoor ones and such open space as the middle of rice paddies.

The troupe has performed in major international arts festivals around the world. Its classic piece entitled "Sound of the Ocean” was named the best program of the 1998 Festivald'Avignon in France by local media. The philosophical presentation has been brought to 20 countries in 100 performances since its debut in 1998.

"That is a great and complex beauty of the drumming - sounds and silence, and simple beats and intricate meshes of precisely articulated rhythms. The concentration and focus of the swaying, bounding performers is impressive, as is the purity of their material at the start,” thus the New York Times once described their work.