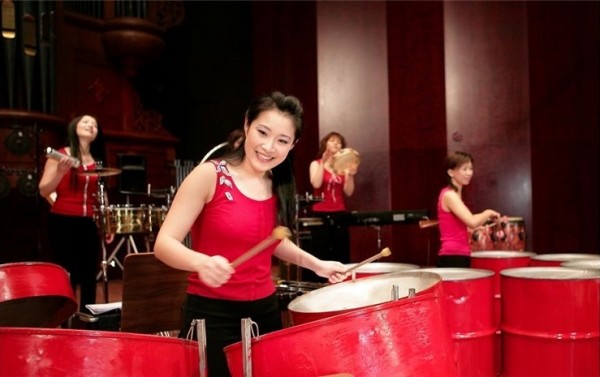 As the driving force in Taiwan's percussion music scene, Ju Percussion Group has introduced the beauty of percussion to the people in Taiwan, and brought the Taiwanese spirit to the world stage through their performances. Now well into its second decade, the ensemble has added three more sub-groups, aiming to bring music into everyone's life.

Founder Ju Tzong-ching is the first Taiwanese artist to have received the Performer Diploma in Percussion by the University of Music and Performing Arts in Vienna. He received the Ten Outstanding Young Persons Award and the National Award for Arts in Taiwan, as well as the Outstanding PAS Supporter Award from the U.S.-based Percussive Arts Society for his contribution to music.

In 1993, Ju launched the Taipei International Percussion Convention, and later changed "Taipei” to "Taiwan” in the title. The convention is held every three years, bringing numerous international percussion ensembles to perform in Taiwan as well as introducing Taiwan's percussion music to the world. It has since become an international platform for musical exchanges.

Ju Percussion Group combines the percussion instruments of the East and the West to create music of mixed elements, and presents its diversity through integration with Peking opera, musicals, and tap dancing. The group had also worked with Cloud Gate Theatre (雲門舞集) and Lanlin Theatre Troupe (蘭陵劇坊) of Taiwan.

Since its establishment, the group had appeared across Taiwan, and joined art festivals in Paris, Budapest, Tokyo, and Moscow as well as performed in the U.S., Australia, and mainland China, making the percussion music of Taiwan heard and appreciated by more people.

In addition, Ju established the Ju Percussion Group Foundation to promote music. They offer summer music camps, concerts, forums, and seminars for those who are interested in percussion. Also, there are 26 Ju Percussion Music Schools in Taiwan and 6 others in China and Australia to cultivate young percussionists. Ju hopes to develop a better global environment and advocate the importance of music in life.

To celebrate its 30th anniversary in 2016, the group will launch a world tour titled "Beats of Hearts!” starting in Taiwan, then to U.S., Europe, and China. The celebration will include concerts for children and xylophone concerts in Taiwan and China. The leading percussion ensemble will again astonish the audiences with their music.