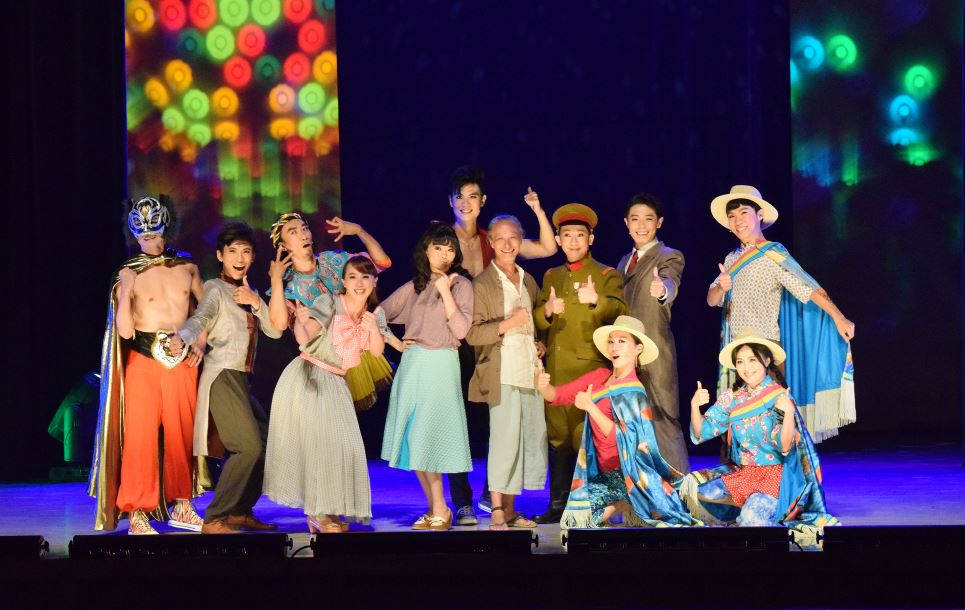 Name:金枝演社劇團
Year of Establishment: 1993
Founder: Wang Rong-yu (王榮裕)
Did You Know That...?
Night falls on the grass at Hobe Fort in northern Taiwan's Tamsui. At the courtyard of the old fortress, one can not only hear the sounds of drums, cymbals, and yelling and screaming, but also take in sight of men in historic Qing Dynasty costumes or French military uniform, holding swords and Lee rifles, and French battleship cannons, a scene pulling people back to the battlefield of the Battle of Tamsui in 1884. This is the scene of "The Legend of Se-a-huan (The Legend of the Fight against the Westerners, 西仔反傳說)," a history play which tells the story of the 1884 Taiwanese resistance in the Keelung Campaign, part of the Sino-French War, and it is performed by local amateur thespians and the Golden Bough Theatre troupe.


Golden Bough Theatre was founded in the spring of 1993 by Wang Rong-yu (王榮裕). The name "Golden Bough" is derived from the famous anthropological work "The Golden Bough: A Study in Magic and Religion (金枝—巫術與宗教之研究)," in which a story is told of how priests and prophets bribed the gatekeepers of Hell with branches of gold and snuck into Hell seeking adventure. Wang wanted to draw on this mythical name for his troupe, which aims to lead the audience onto profound adventures.

Wang was born into a family with a history in koa-á-hì (Taiwanese opera). His mother was Hsieh Yueh-hsia (謝月霞), a popular performer in the form for over five decades. Immersed in the art from a young age, Wang, however, in his early years, considered "O-pei-la-hi(胡撇仔戲)," a combination of the outdoor Taiwanese opera with popular culture, unrefined. After some twists and turns, he found himself eventually taking to the stage, completing studies as an actor in the fifth class of Lanling Opera Workshop (蘭陵劇坊). Taking some professional lessons in modern Western theater, Wang learned to appreciate the traditional and found his orientation. Since then, he has participated extensively in temple fairs, learning the ceremonies, tīn-thâu performances, and the rituals of Taiwan"s indigenous peoples, and as a result, the performances of Golden Bough Theatre always present a deep connection with this land.

In 1996, the troupe staged its debut show, the Taiwanese opera "The Female Robin Hood—Pai Hsiao Lan (台灣女俠白小蘭)." They used a small truck as the stage, with audience sitting around. The performers not only put themselves right in front of the audience, but also let the audience talk directly to the actors, creating a one-of-a-kind, improvisational performance that made the show uniquely charming.

In 1997, they performed "God—Ritual of Troy (古國之神—祭特洛伊)" at the Huashan cultural and creative park in Taipei. Based on Homer's Iliad, the show incorporated substantial amounts of folk opera elements and traditional Taiwanese rituals, which included indigenous songs and high, exaggerated sweeping steps of temple processions, and concluded with a Western style elegy in sacrifices. The show marked a new page in Taiwan's theatrical production for its combination of aesthetics. Some critics commented that it was a “frenzied performance which seemed to echo a line chanted in the play — 'Hell is reality, war is a dream, and existence is a relic'."

In 2011, Golden Bough Theatre moved to Cloud Gate II’s studio in Bali, New Taipei City. Wang remarked that they were standing on the shoulders of giants, acclaiming the achievements of the Cloud Gate Dance Theatre. Wang has said time and again, "the most important meaning of art is to create common beautiful value, and no matter what else, it will all return to the land." At Tamsui's Hobe Fort, he finally successfully re-staged "God—Ritual of Troy" again in 2013, and the performance at a setting of century-old fortress relics further intensified the battlefield atmosphere.

Since then, Golden Bough Theatre has continued to be deeply involved in Tamsui, forming an "art team" with the local troupes Sunson Theatre (身聲劇團), Genio Dance Group (精靈幻舞), and What’s Young (青藝盟). The first Tamsui Art Festival presented them with the opportunity to perform on a large scale for the first time, with amateur actors, artists, government agencies, and people of the community involved in putting on "The Legend of the Fight against the Westerners" at Hobe Fort, a show which was staged at the annual Tamsui festival for a decade. The show, like taking the audience back to the battlefield of the Keelung Campaign more than a hundred years ago, continued to receive rave reviews.

The main concern of the Golden Bough Theatre has always been the land in which they are rooted. The troupe has been named an outstanding performance troupe by the Ministry of Culture multiple years. Being selected for government support, the troupe will continue to promote the "Golden Bough Traveling Performance: Beautiful Taiwan (金枝走演．美麗台灣)" project, creating performing arts memories together with local communities.