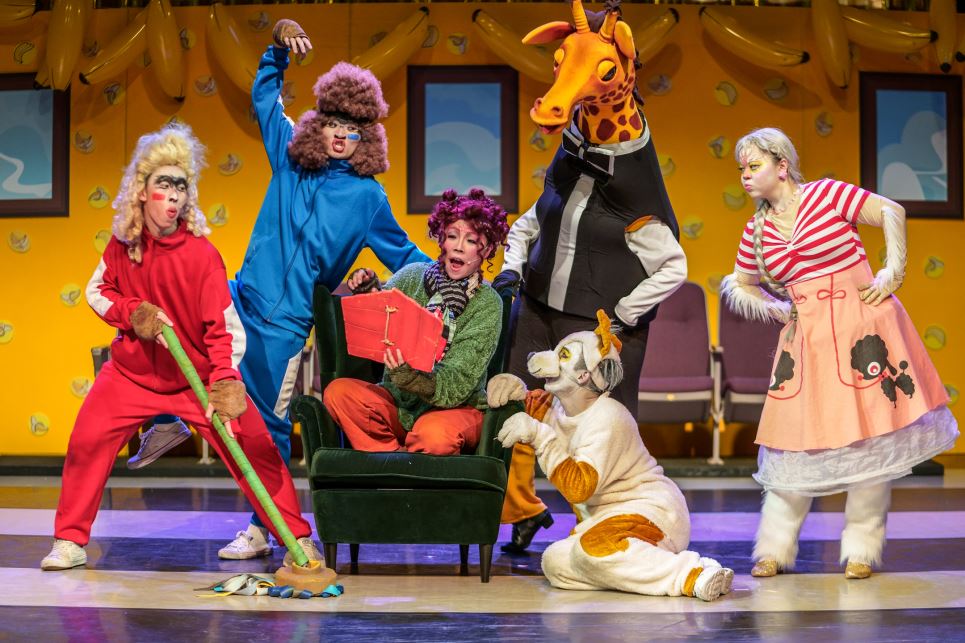 ‧ Chinese Name: 玉米雞劇團
‧ Year of Founding: 2003
‧ Place of Founding: Hsinchu, Taiwan
‧ Did You Know?
Corny Chicken Theatre was founded with the dream of becoming the Théâtre du Soleil of Taiwan. In Hsinchu, where the troupe has been based and working for more than ten years, it follows the example of Théâtre du Soleil founder Ariane Mnouchkine, generating new creation ideas for the family-oriented theatres in Taiwan, with rich themes, distinctive topics, and of course, endless imagination and wonder.

Corny Chicken Theatre was the first professional theatre company to come out of NTU's Graduate Institute of Drama and Theatre. It was founded in 2003 by the choreographer and director of the theatre school’s directing team, Tu Yahui (aka Tu Yefei), and is dedicated to imaginative comedic productions.

The company’s name in Chinese, pronounced Yumiji, was designed to be somewhat homophonous with the English word "imagine," not only calling to mind the imagination they aimed to imbue their shows with, but also the multicultural, multilingual aspirations of the company. Their English name, meanwhile, conjures a comic image of a chicken turned cheesy comedian, representing the comedic focus of their work. The aim of Corny Chicken Theatre is to break down stereotypes around children’s theater, presenting professional theater aesthetics to audiences of all ages through stories full of childlike wonder and profound meaning.

With its initial members drawn from alumni of theatre schools in Northern Taiwan, the first generation of Corny Chicken Theatre featured many people who are now at the top of the field today. However, with the leader of the troupe particularly connected to her hometown of Hsinchu and thus determined to cultivate the local arts and culture market there, they moved from Taipei to Hsinchu in the company’s second year.

In their 13 years in Hsinchu, Corny Chicken Theatre have been connecting local sentiment with community resources, while at the same time integrating the characteristically multicultural environment of Hsinchu, full of foreign immigrants, to create a more cross-cultural creative philosophy. They also combine various theatrical genres—from comedy to pantomime, and even cabaret and musical theater—with children's theater, creating a new "family-friendly theater" that gives every member of the family something fun to enjoy while evoking different emotional responses in each of them.

French stage director Ariane Mnouchkine founded the Théâtre du Soleil in the suburbs of Paris, thinking outside of the Parisian core, aiming to influence the world from an abandoned factory. Its members, drawn from various countries, collectively create moving works that reflect life by spanning history, politics, and contemporary society. Corny Chicken Theater hopes to become the Théâtre du Soleil of Taiwan. In Hsinchu, where the troupe has been working for more than ten years, it has followed Mnouchkine’s example in creating a new way of thinking about family-oriented theater in Taiwan, with rich themes, distinctive topics, and of course, endless imagination and wonder.

As the only theatrical performance company in Hsinchu, Corny Chicken Theatre not only performs regular shows, but also translates its feelings for the land into action, providing a way into the community through theater and striving to create links between performance culture and the land. Although the acting experience of the community is no match for that of the professionals, the director-choreographer can always rely on their years of experience to find the most suitable roles for these amateur actors. This, coupled with their unique scriptwriting and observation skills, which facilitate the incorporation of the actors’ own experiences into the scripts, results in community performances that are full-fledged productions. What Corny Chicken brings to the community is not performance classes that are unrelated to them, but rather a rigorous playwriting process and invaluable interactions between the residents and that process, enabling each community performance to foster new connections and dialogues with the land.

Corny Chicken Theatre has always had a distinctive spin on comedy, constantly weaving together various creative possibilities, from music, video, and cross-cultural experience to historical tales and fables, to tell brilliant stories on stage and give audiences a hit show.

The company also aims to use its theatrical performance to get beyond traditional didactic approaches and replace them with "art in action." Through courses planned by professional theater practitioners, Corny Chicken is convinced the performing arts will sprout in all corners of Hsinchu and their compelling content will transform educational and social issues into visual memories that will etch themselves in the hearts and minds of the public. In this way, theater will not only serve as entertainment, but also engender positive values that will last forever and bring together a Hsinchu community consciousness.