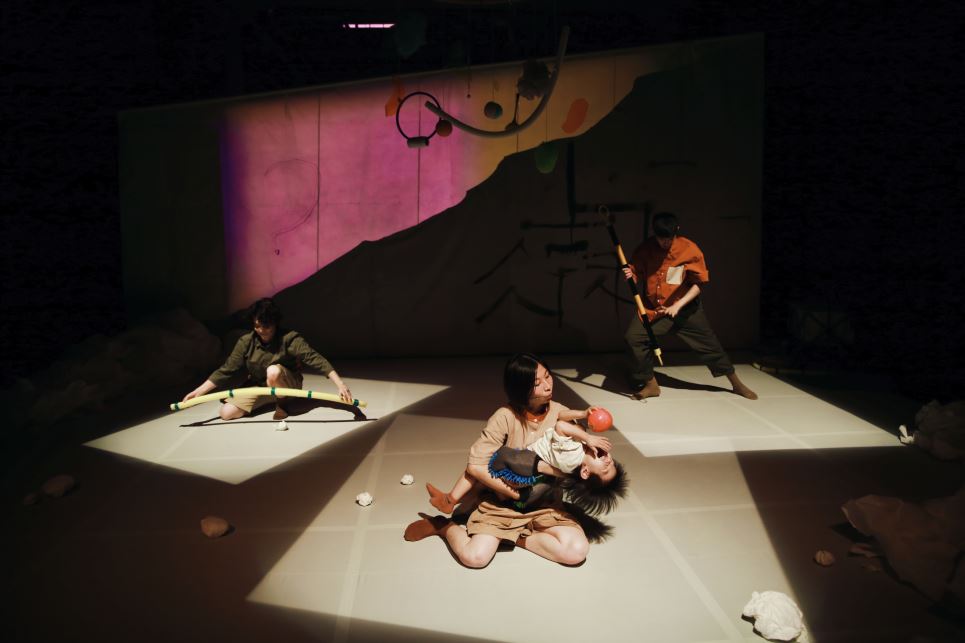 Did You Know?
Baby theater originated in Norway in the 1990s. Since then, many European countries have followed suit to provide artistic participation for all children regardless of age. The world’s first Baby Day event was held in Belfast, the United Kingdom, in 2015, focusing on parent-child theater activities designed especially for kids under the age of three through performing arts.

Theater workers Wu Wei-wei (吳維緯) and Tso Han-chieh (左涵潔) established the Double & Cross Theater Group in 2014. They love the theater and wanted to spread that love further, and this is what inspired them to try and inject more diversity into theatrical creation in Taiwan. At the same time, they also aim to make theater a medium for dialogue with life, society, and people.

In 2016, Double & Cross Theater Group produced Taiwan's first dance theater work based on the concept of "baby theater." Entitled "We Need a Flower (我們需要一朵花)," it broke down the barriers of the stage, bringing their audiences of just 25 to 30 people onto the stage and into the play, making them part of this interactive performance art. The production team spent a lot of time planning and rehearsing, trying to figure out how to deal with the audience, parents, and children, how to break down the wall between audience and performers, and especially how to interact with parents so that those parents could and would confidently entrust their children to the theater.

To this end, before the performances even begin, the audiences find themselves already in a shared space for play, letting everyone get acquainted with the performers, communicate with each other, and build trust. The dancers prepare even more painstakingly. They need to pay full attention to how and where they move their limbs so as not to accidentally hurt any children who are crawling or running in the space. Because of this, even though the performances are only a short 30 minutes, they require an exhausting amount of effort from the performers.

The performers use a slow and steady performance rhythm to give babies, who are extremely sensitive to their environment, a feeling of stability. Double & Cross try to use the babies' speed and perspective to build their theater and gave the babies a number of opportunities for active participation. In these relaxing shows, because the babies interact with the surrounding environment and each other so simply, their smiles, curious expressions, and reactions also directly affect the adults accompanying them. The adults let their tense hearts soften and their emotions flow freely, feeling the pure beauty together with the children's surprised eyes and admiring voices.

Compared with theater for children and adults, performing baby theater is another level of difficulty. Baby theater has a unique form, focusing on the stimulation and development of the baby's perception and imagination. Through simple and uncomplicated spatial structures, it is not necessary to tell a story, but it can nonetheless attract babies' bodies and minds to it, fully immersing them in the performance. The presentation of every detail requires a close combination of specialties in various fields, such as child psychology, neuroscience, art, and aesthetics.

In recent years, Double & Cross has launched a number of new shows, including "H2O" in 2019, "One Page Forest (一頁森林)" in 2021, and "For Parents: World in a Word (一字一世界)" in 2022. As a pioneer in Taiwanese baby theater, Double & Cross Theater Group has continually created performances and held parent-child workshops, and through them, they have profoundly felt the gradually maturing care and opportunity around baby theater in Taiwan. The idea of getting people in contact with the arts from age zero not only represents an advance in art policy and education but also re-examines how we can care for the youngest among us, which then extends to the family, society, and even the country.

The troupe has been continuously promoting and keeping its experience in Taiwan, not only creating a diversity of baby theater in the country but also further bringing theater and life closer together. At the same time, Double & Cross continues to pay focus on the current situation of young local artists, providing planning and companionship in production and creation to facilitate emerging performing arts workers building their energy and more capably expressing themselves.