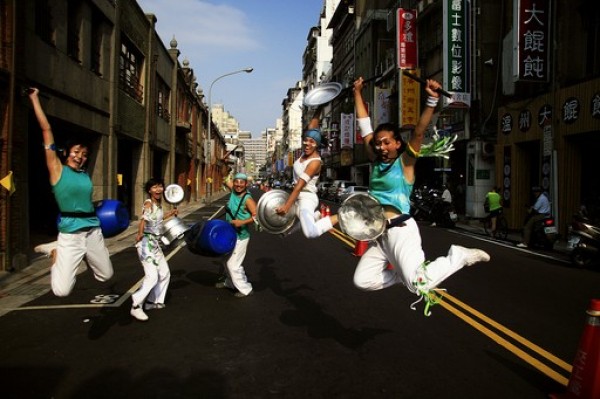 Sun Son Theatre is a unique musical theater that incorporates drama, voice, body, and rituals to present dynamic and interdisciplinary performances. Consisting of versatile members, it has been one of the teams supported by the Ministry of Culture since 2003, for it has constantly refreshed audiences with its innovative and diverse productions in the last two decades.

The troupe, which was originally named Sun Son Performing Society (身聲演繹社), was originally established only to produce "The Inner Recall (徊聲),” a performance that was expected to put together what Chien, Ng, and two other members had learned from U-Theatre, a world-famous Taiwanese troupe with whom they previously performed.

To the troupe's surprise, the production received positive feedback for its integration of body movement and sounds, which was new to Taiwan's audiences at that time. Thus, Chien and Ng decided to continue the troupe even when the other two members left after the production, and renamed it the Sun Son Theatre.

With the core concept of using body, voice, and instruments to explore the essence and power of humanity as well as the inner self, the troupe experimented and developed various kinds of performance forms based on collective creation.

The troupe trains its members to embody the qualities of an actor, dancer, and musician to develop different possibilities by mastering, integrating and breaking through the three roles. It has allowed members to create and present multi-disciplinary productions.

Following "The Inner Recall,” the troupe has produced 20 modern theatrical works which are different in styles and forms. It has staged its productions in Taiwan, Brazil, Turkey, Japan, South Korea, Malaysia, Senegal, China, and the U.S.

In particular, Sun Son Theatre collaborated with Mexican theater director Adriana Duch Carvallo to explore timeless Mayan imagination and beliefs about the world through a masked performance. Their joint production, "The Golden Canoe,” was adapted from the Mayan folk story "The Land of the Pheasant and the Deer (La Tierra del Faisan y el Venado)” by Antonia Mediz Bolio.

In 2017, the troupe joined the 2017 Edinburgh Fringe with four other Taiwanese troupes. It staged "Heart of Darkness,” a production that is inspired by choreographer Low Pei-fen's (劉佩芬) grandmother. By using long hair as a symbol, the production presented different phases of a woman's life and explored how the decisions and choices people make are irreversible, through a performance combining movement, rituals, and music.

Sun Son Theatre will return to Edinburgh in August 2018 with "Once Upon A Daydream."