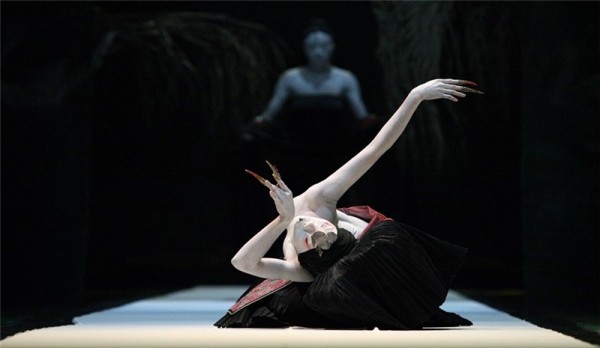 Performances by the Legend Lin Dance Theatre always attract keen interest from both Taiwan and overseas; they all stem from the creative genius of Lin Lee-chen, the founder and artistic director of the theater group.

Before establishing the Legend Lin Dance Theatre, Lin had been dancing, choreographing, and teaching for over thirty years. She vanished from the stage from 1982 until 1989, when she presented her pivotal piece, "Celestial Sacrifices,” which was inspired by seven years of field work. Lin worked with her friends to research folklore, customs and other rituals used by the Taiwanese to celebrate their festivals, especially those involving the spirits and gods.

This marked the beginning of her devotion to an ongoing search for the cultural beauty and spirit embodied in ancient religious performances.

The Legend Lin Dance Theatre produced two sensational works, "Offerings” and "Sacrifices to the Flower Gods,” within their first decade. These two classics conveyed a cosmological viewpoint that encompasses the trinity of gods, people and land; in 2009 they produced a finale to complete the trilogy, focusing on how the environment and the land should be cared for.

Numerous international invitations have poured in since their debut; in 1998, they were the first Taiwanese dance group in half a decade to perform at the d'Avignon Festival in France. From 2000 to 2002, the Legend Lin Dance Theatre toured the cities of Lyon and Madrid, and also locations in Italy.

They were invited to performed the work "Hymne aux Fleurs qui Passent” on the European channel ARTE, along with many world-famous art groups; they were the only Asian troupe featured in the production. In 2008, the group toured Europe again, and also attended the Cultural Olympiad in Beijing.

The Legend Lin Dance Theatre continues to develop exquisite and innovative works of modern dance; the company also offers classes in modern dance techniques in cooperation with local community colleges to promote this art form to the public.