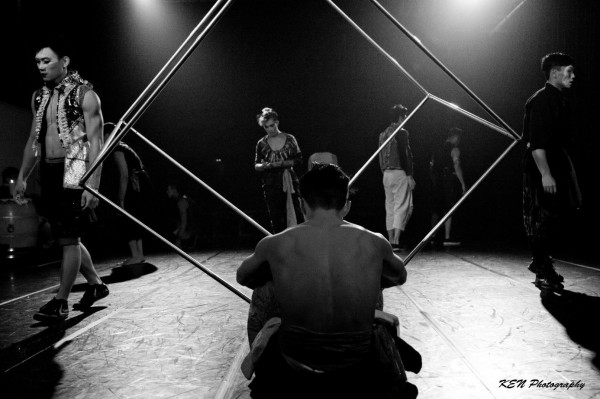 Lin has achieved a solid training in acrobatics since he started studying when he was ten. While studying at the University of Taipei, he formed the acrobatics troupe with the goal of creating his own values. Rising to fame with their work “Primal Clothing – Ten Dances (初衣十舞)” in 2012, Lin successfully brought the troupe to stages overseas.

During their time in Europe, Lin learned the difference between acrobatics in Taiwan and in Europe – especially in terms of training. He noticed that European acrobats focus on creativity, while Taiwanese acrobats focus on technique. Lin concluded that techniques can be trained and refined later, but creativity has to be cultivated from the very beginning. With this epiphany, Lin began a new journey with FOCA.

In 2014, FOCA created “Self and the Others (人我之間),” a performance incorporating traditional and modern elements to present a story of seven youths from different backgrounds. The relationship between self and other is demonstrated through the dynamic movements exploring the idea of having everything in the modern age, but owning nothing in the unknown future.

After performing in Taiwan, FOCA brought “Self and the Others” to the Edinburgh Festival Fringe in 2015. The British press ranked their combination of traditional acrobatics, contemporary circus, and theater skills among the top five circus acts in the festival.

Lin once said: “FOCA may not be the next Cloud Gate Dance Theatre or Cirque du Soleil, but we have the responsibility to introduce the circus of Taiwan to the world in our time.” With members all in their mid 20s, the young group is on their way to realize their dream.