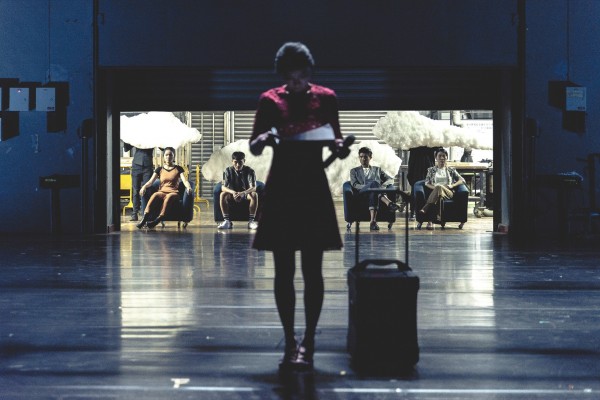 Co-coism is a newly established group that seeks to create as a team. The theater trio aims to develop live exhibitions, responsive creations, and immersive projects through collaborative creation. Its production "Ever Never (曾經未曾)” was nominated for the 15th Tashin Arts Award.

As filmmaking graduates from the Taipei National University of the Arts, the three founders have learned that making films requires not only technique but also the appreciation and acquisition of culture. Thus, after graduation, Hung pursued further studies in theater while Chang and Huang joined the local television industry.

After gaining experience in different fields, their passion brought them together to form Co-coism. With devised theater as their core concept, the three founders share the role of "author” to create art in parallel.

The group's creation is not limited to a certain form of presentation; instead, it emphasizes on the interaction and negotiation with society, environment, technology, and history. The ongoing dialogue amongst different fields is integral to their process of creation.

As an emerging theater group, Co-coism produced three works collaboratively as a team, and each of the three pieces is inspired by incidents in everyday life and the emotion driven by such incidents.

"Tomorrow Inn (明日和合),” for example, is a participatory performance that invites two people to spend 120 minutes alone in a room. "You Can Sleep Here (可以睡覺),” on the other hand, is a production that uses "sleeping” as a movement to explore friendly public space.

Its latest project - "Between Meals (做一頓飯)” - is another participatory performance that allows the participant to cook for someone who he/she won't meet again, and leave with a note or recording of the dining experience. After that, another four strangers will be invited to taste the food.

The givers and takers in "Between Meals” are the core of the performance, in which they have to face and deal with their personal emotions. Each participant leaves with an abstract memory of taste based on the interactions.

This year, the theatrical production "Ever Never” by Co-coism and collaborating playwright Feng Chi-chun (馮琪鈞) has been selected for Edinburgh Fringe. The piece will allow audiences to embrace what they currently possess and face what they have lost through a journey on an airplane that serves as a vehicle where past and present collide.