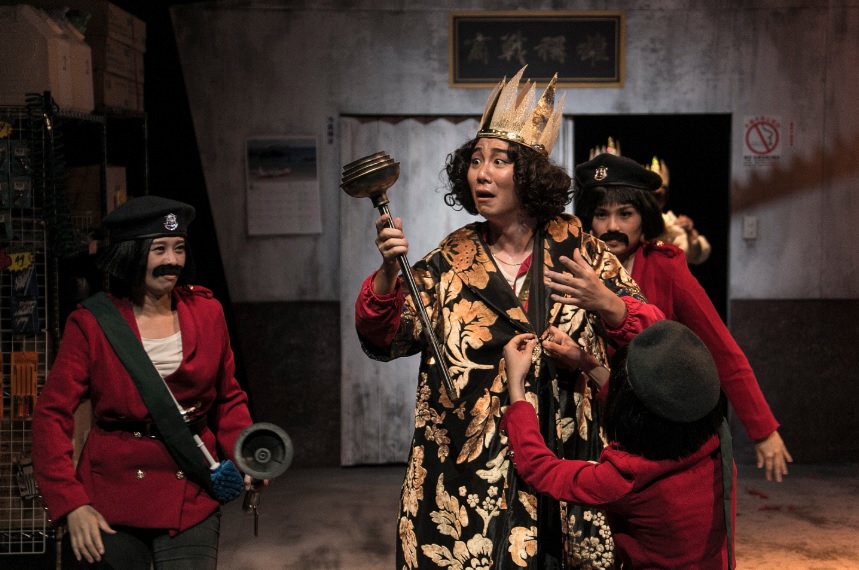 Our Theatre is the first professional modern theater company based in the southern city of Chiayi. Every year, they produce at least one adaption of a classic Western play, performed in Taiwanese. They aim to interest people in the Taiwanese language, help people understand and accept it, and prevent its disappearance.

Jhao-Cian Wang, the director, began getting involved in theater in high school, and recalls having to travel to Taichung and Kaohsiung to see plays. He, and friends from the high school's theater club, founded the company when Wang was 18, in 2003; it has made its home in the Chiayi Performing Arts Center since. At first, the group were all students, who performed collaborative shows, mostly based on their lives and their academic training in performance arts.

However, in 2009, they felt this wasn't providing enough inspiration for performance, and began performing classical plays from the East and West. They have continued to do this in experimental styles and free adaption to allow them to resonate with ordinary Taiwanese people.

For instance, "Kim Suí Tshī-Bóo (Kim Sui Raises a Wife)," an adaption of a French play by Molière, was influenced by medicine adverts on the radio. On the other hand, their version of the story of the Spider Maidens, a folk story from Tainan, turned into "Siânn-Tshī Luân-Ko Tsìn-Hîng-Khiok (The March of City Romance)," a multi-generational love story.

Focusing on comedies, their productions have so far encompassed Shakespeare, with "Juáh-Thinn Hâm-Bîn (Dog Days and Daydreams)," an adaption of his romantic comedy "A Midsummer Night's Dream." They then adapted "Ubu Roi," a proto-Dada, proto-Surrealist work by Alfred Jarry. They have also created a version of Shakespeare's blood-soaked tragedy of ambition, titled "Macbeth: Paint it Black!"

"Macbeth: Paint it Black!" was a collaboration with Japanese playwright Show Ryuzanji, who previously adapted the play in 1988 by using the Vietnam War as a backdrop. In 2016, he arrived in Taiwan and decided to collaborate on a feminist version of the play, infused with the flavors of Chiayi.

The play is not only wholly written in Taiwanese, but adapted into a more vernacular register. It also includes dance and martial arts, and after the bloody conclusion, the whole cast promises a ray of hope by singing "I Have a Dream" together. The cast of almost 30 spent weeks practicing, which paid off when the play went to the Si-biu International Theatre Festival in Romania, one of Europe's largest theater festivals. In fact, Our Theatre was the first Taiwanese group to perform there.

The group doesn't just put on plays, however. Every summer since 2009, they have organized their Grasstraw Festival, hosting performances in Chiayi's performing arts centers and giving young actors a chance to show their stuff. The event now last for two weeks and includes lectures and artistic activities. Dozens of groups meet in Chiayi, and the festival attracts 5,000 visitors. In addition, Our Theatre organises winter training courses for aspiring actors and actresses, culminating in a group performance held at Grasstraw.

Our Theatre is not only popular but also avant-garde, faithful to Chiayi, and open to influences from around the world. It will make its next international experience with "The Delusion of Home" as part of the Taiwanese showcase at Edinburgh Festival Fringe 2018.