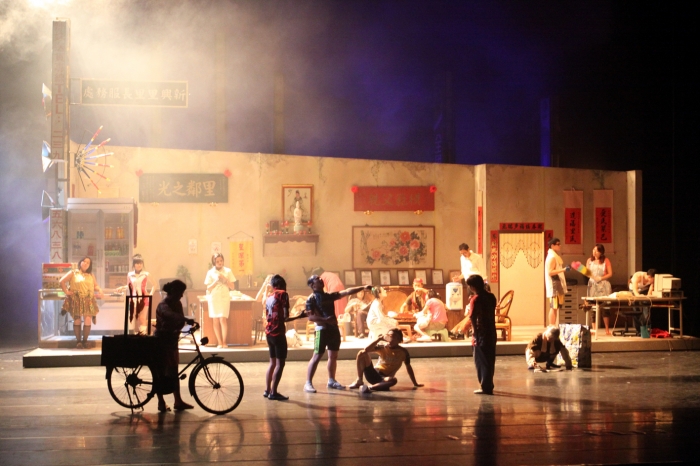 As an affiliated theater of the Paper Windmill Cultural Foundation, the Greenray Theatre Company has been striving to produce quality, original Chinese-language theatrical productions since its establishment. Targeting adults, the theater has tugged at the audience's heartstrings by illustrating the everyday life of ordinary people in Taiwan from different perspectives.

Over the past decades, the theater has launched five series and produced 40 diverse works including original Chinese-language musicals and stage plays adapted from Taiwanese and foreign literary works. As the theater’s productions often explore everyday life and social issues with stories that audience members can readily identify with, their performances have attracted numerous first-time theatergoers.

With acclaimed filmmaker Wu Nien-jen joining the theater in 2001, it launched the "Conditions of World (人間條件)" series. Written by Wu, the series has been hailed as the most representative Taiwanese-style stage play. Presenting the unique characteristics of the people of this land, the series brought to light stories of ordinary people through amicable dialogue. So far, the productions have been staged more than 260 times in Taiwan and China.

In 2003, the theater began producing plays based on award-winning literary works, such as Nobel Prize-winning "Of Mice & Man" by John Steinbeck and Pulitzer Prize-winning script "Proof" to introduce outstanding Western works to Taiwanese audiences.

Since 2010, the theater also has released three productions adapted from novels written by Taiwanese authors — "In the Time of Qingming (清明時節)" by Cheng Ching-wen (鄭清文), "Temperature of a Single Man (單身溫度)" by Wang Ding-jun (王鼎鈞), and "Arresting (押解－菜鳥警察老扒手)" by Duan Tsai-hua (段彩華).

Wu's short story collection "These People, Those Things (這些人，那些事)" and "The Birth of Cocoon (蛹之生)" by screenwriter Hsiao Yeh (小野) were also adapted into a play titled "Loneliness, the Ship of Singles (寂寞．光棍船)." Rooted in Wu's personal experience and Yeh's perspective of love, the production is an insightful depiction of love in urban Taiwan.

In addition to producing and staging performances, Greenray Theatre also actively engages in cultivating and training young, aspiring actors by holding courses on performing arts and offering opportunities for talented students to participate in the theater's productions.